I don’t know what’s worse, failing to update this site with no posts for months at a time, or ending that drought with an act of shameless self-promotion.  But hey, we can’t really judge until I’ve done both, right?  So here goes.

Rob Kelly of the legendary Aquaman Shrine website (among others) has finally realized his long-held dream of publishing a book based on his blog, “Hey Kids, Comics!”  and one of the essays featured in the book is by yours truly. 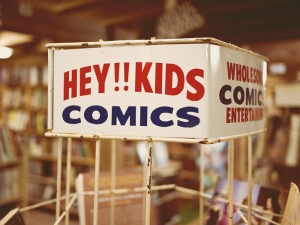 The title of the book (like the site) refers to the little tin sign that used to adorn those metal “spinner racks” that once held comics in pharmacies, grocery stores and newsstands across America.  For kids like me, it was a beacon as full of portent and promise as the bat-signal flashing over Gotham City.  Whenever I entered a new (or familiar) place of business where the sale of comics was an even slightly reasonable possibility (and sometimes even not), the spinner rack was the first thing I sought out, and it helped that was built tall, with that brightly lettered greeting, making it easier to spot.

In the book, authors of varying backgrounds and ages (though many of an age generally in the vicinity of my own) share stories of how comics shaped their personal and professional lives, and if you were ever a fan of the funny books yourself, you’re bound to see a bit of yourself in at least some of those stories.

For my part, I shared what it was like to be on a strict “no comics” punishment, and what happened when Dad found a loophole that opened my eyes to a whole world of comics beyond guys in capes and tights.  But if (somehow!) you’re not that interested in my own purple prose, you should get the book just for the contributions by celebrated comics professionals like Steve Englehart, Alan Brennert, Bob Greenberger, Steve Skeates and JM DeMatteis, along with a lot of other talented fans with great stories to tell.

If you’re interested in comics at all, seek out a copy of Rob’s book at Amazon and support not just him but, by extension, all the guys out there shopping around potentially fascinating books to publishers with hard heads and limited vision.  “Hey Kids” finally found a home with Crazy 8 Press, and the success of this book would encourage them to keep putting out stuff other publishers aren’t willing to take a chance on.

Meanwhile, as I write this the VCU library is having its annual Book Sale and so the Morefield house is piling up with comics bought at — get this — 10 cents apiece! Yep, just like the golden age.  Jason, Scott and Grace are tanking up on Superman, Thor, the Flash, the Legion of Superheroes, Richie Rich, Uncle Scrooge, the Fantastic Four and the Justice League the way they were meant to be enjoyed; in full color, on yellowing, smelly newsprint for a price that makes it okay to read until the whole thing falls apart in your hands.  And they’re all from an era when superheroes actually behaved like good guys, and a whole story might get told in one issue.  Too bad we have to turn back the clock 30+ years to enjoy all that again, but then a comics fan learns to take his thrills where he can find them; whether from a squeaky spinner rack in a drug store stinking of old cigarette smoke or from musty longboxes in the basement of a library.  The portal to worlds of adventure materializes in the unlikeliest places, and you have to be ready to jump in when it does.

I’ve made three trips to the sale already, and I’ll probably sneak off to it again, if only for the satisfaction of coming home with another armful and announcing, “Hey Kids, Comics!” 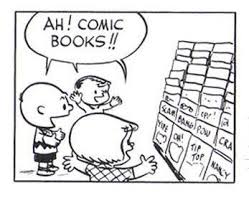 One thought on “Hey Kids, Comics!”