Well, today the counter clicks over to 11, meaning Jason is officially one year into his second decade, incredible as that seems.  After a weekend party with extended family, he spent the day relaxing at home with his birthday loot (the Nintendo 2DS being the star attraction).

Bringing you up to date: Back in February, we all trekked up to Roanoke for the Virginia Scholastic Chess Championship, where Jason finished 5-1 to take fourth place on tie-breaks.  Given the size of the trophy, I was just as happy he didn’t finish higher, as getting a larger trophy into the car would’ve meant choosing someone to stay behind. 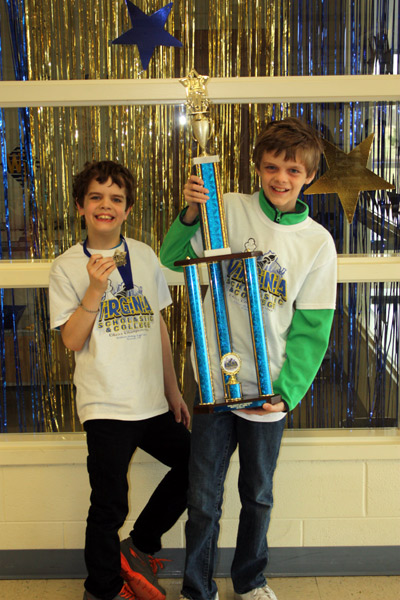 We were also notified by the US Chess Federation that Jason is now one of the top 100 players among 10-year-olds, a distinction he hopes to duplicate in the 11-year-old grouping.

Also since my last post here, Jason crossed over from Cub Scouts to Boy Scouts, joining the Eagle Patrol in his new scout home of Troop 800, where he’s making new friends and having a great time.

Scott, meanwhile, has been distinguishing himself as our resident musician, having taken to piano like a duck to water.  Officially he only has lessons once a week, but whenever he gets a free moment, he makes  a bee-line for the piano to practice.  All well and good unless it’s first thing in the morning; Mommy likes her sleep.

Grace has made great strides in her reading, and is getting really good at drawing, especially butterflies and rainbows (she’s such a girl!).  Recently she was “drawing” pictures on Mommy’s back with her finger and having Mommy guess what they were.  The first was easy: “A butterfly?” “Yes!” The next was considerably more involved, and Mommy had to ask her to do it again, but larger. It was still too complex to figure out, so Mommy had to give up.  “It’s a doctor giving a little tiny fish a check-up!” she said.  Duh.  The stethoscope dangling in the fishbowl should have been a dead giveaway.

Needless to say, life in the Morefield home continues to be great fun.  Today’s milestone drives home how quickly it’s all speeding by, but we’re determined to enjoy it while it lasts.

One thought on “Happy Birthday, Jason!”