As I write this, only a few hours remain in the year 2020, and I can’t imagine anyone will be sorry to see it go.

Around this time last year, I added a brief post to share a doodle I’d done, and wonder what the year ahead would bring.  Suffice to say I was as blindsided as anyone else. 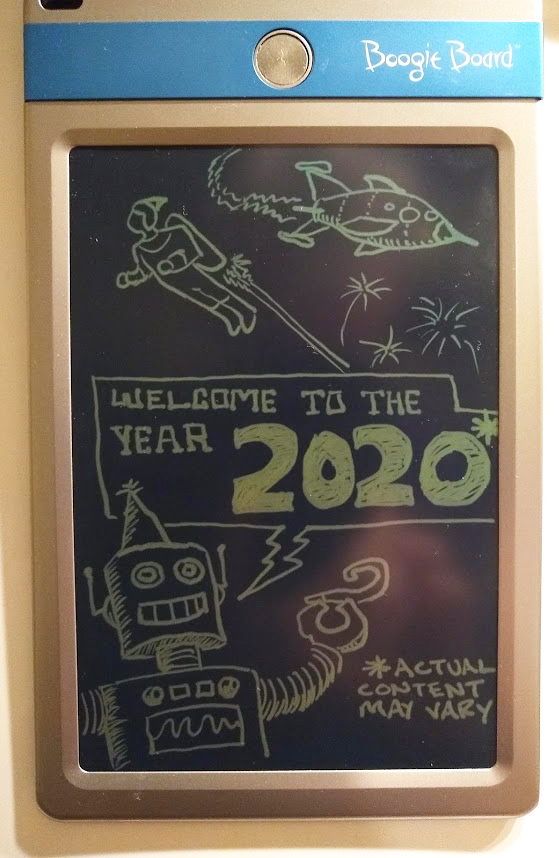 The robot was a safe bet, and sure enough there was plenty of robot news throughout the year, including robots that  disinfected hospital rooms with UV light  to control the spread of COVID-19 and just generally became essential workers in coronavirus response efforts.   And just for good measure, the list of “things robots do better than I do” may now be amended to include dancing.

I also included a picture of a guy in a jetpack, so maybe I was a bit prescient, because there were indeed stories of some joker zipping around over Los Angeles at 3,000 feet and causing headaches for commercial aircraft.

The “spaceship” seemed like a safe bet, too.  Sure enough, 2020 saw numerous missions to space, including three spacraft headed for Mars (one from NASA, another from China and a third from…the United Arab Emirates?!?), China’s robotic sample collector that went to the Moon and back, and SpaceX’s crewed mission to the International Space Station.

Of course, there was plenty I didn’t get right in the doodle, and if I’d seen it coming, I’d have been out buying masks, hand sanitizer and toilet paper instead of doodling.

At this writing, we’re 9 months into isolation here at Casa Morefield.  That’s 9 months where I have not: eaten restaurant food, shopped at a grocery store (or any other store), attended church services, taken any form of public transportation, shared a room with any members of my extended family, seen a movie in the cinema, attended a scout meeting or campout…etc.  I’m luckier than most in that I’m not a terribly social guy to start with, and I like being at home.  Also, Laura, the kids and I all get along…I know that hasn’t been true for a lot of families.

At this point, it’s typical to look back on a year and reflect on all the things you’ve done, but it’s a much weirder experience to think about all the things that did not happen, or might have under different circumstances.  This was going to be the year we traveled around the country visiting prospective colleges with Jason: none of that transpired.  At one point, Laura wanted to do a cross-country trip with the kids before Jason left the nest; now that’s a no-go as well.  We usually print up calendars every December with photos of the kids’ adventures through the year: this time more than half of the calendar involved “what if” images I created with a greenscreen and Photoshop, putting the kids in places they might’ve liked to go in different reality.

I’m hopeful 2021 will be a better year, though it’ll likely take a while before we know for sure.  Various vaccines are in the pipeline, Jason should be hearing soon from the colleges he’s applied to, and we get a four-year respite before the next presidential election.  Honestly, I have no idea how it’ll go, any more than I did last year or any other.  But if New Year’s Day is good for anything, it’s as a moment of promise and hope, a “reboot” button to start the annual cycle over again.  After all, until it gets here, we’re just as likely to have a bright future as a dark one, right?

Anyway, that’s what I’ll tell myself.  With any luck, we’ll meet here again next year with a much happier 12 months to look back on.