Jason and Scott are big superhero fans, which is perhaps not surprising when you consider how many comic books I have around the house.  Lately they’ve taken to inventing their own heroes and drawing their adventures, much as I did when I was their age.  It bears mentioning, however, that while I did it just as an exercise in imagination and to fill the void between visits to the drug store for real comics, Jason takes a more practical view; he’s polishing up his hero (“The Changer”) to be ready for merchandising deals and a movie franchise.  In fact, I think he’s already spent half the fortune he plans to make on royalties.

Scott’s another matter; to be honest I’m not 100 percent convinced he’s taking the whole thing seriously.  His latest hero is “Fireflash,” a guy whose super-powers include shooting lightning bolts from his fingertips and accessorizing a spandex battle suit with a stovepipe hat. 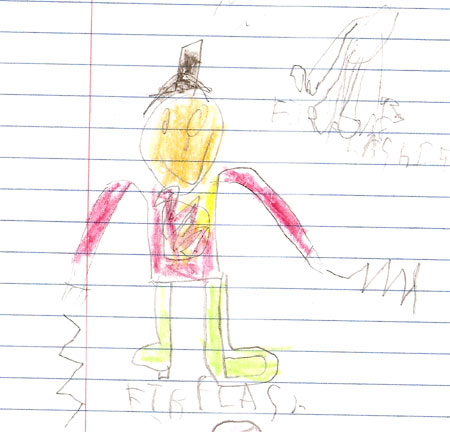 Still, Fireflash is downright conventional compared to his partner in crimefighting.  Oddly shaped and colored pink from head to toe, I at first thought his name was “Tuneman,” and wondered if he was a musical hero.  Scott informed me that I read it all wrong: It’s “Tongueman,” a superhero completely covered in (or made of?)  tongues. 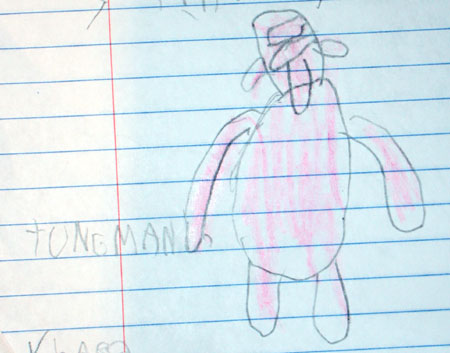 I’m not sure he’s worked out the details yet, but I’m guessing Tongueman’s abilities include “licking” evil, or maybe unleashing super-raspberries.  Logical “weaknesses” would include excessively hot coffee, Polish surnames and British cooking.

Not to be outdone, there’s a third member of the adventure team, namely this guy: 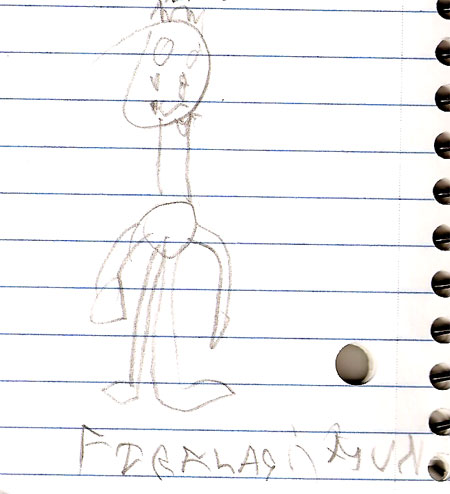 This name was completely illegible to me, so I had to ask.  Beaming, Scott informed me it’s “Fireflash’s Uncle Larry.”  Well, of course it is.

So beware, evil-doers everywhere!  Fireflash is back to kick some bad-guy behind, and this time he’s brought Tongueman and his Uncle Larry!