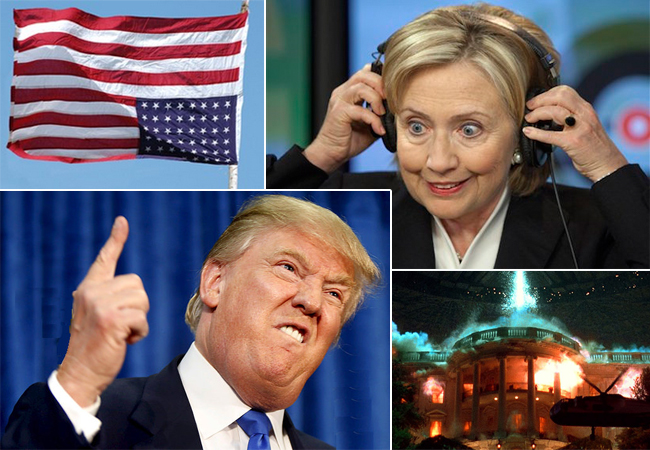 Seriously, America?  This is the  best you can do?  Donald Trump vs. Hillary Clinton?

Okay, I suppose Aliens vs Predator, Freddie vs Jason and MegaShark vs. Giant Octopus proved there are cheap thrills to be had whenever two monsters throw down, but let’s face it, what’s always missing in those conflicts is a contender to actually root for.  The fights may be spectacular, but in the end no matter which creature comes out on top, humanity’s on the losing end.

I like to consider myself an involved participant in the democratic process, having voted in every major election since 1984.  This time, though, I’ve seriously considered sitting it out, maybe just buying a bottle of bourbon on November 8 and toasting the end of the grand experiment that was the USA.  Hey, 240 years was a pretty good run, right?  But I know me, and I won’t pass up the chance to weigh in on the other issues on the ballot, so I’ll show up on Election Day, regardless.

That just  leaves the question: do I leave the “President” part of the ballot blank, or write in a name?  I’ve never done a write-in before, it might be fun.  Actually, I’m not even sure the ballots at my polling place allow for write-ins.  If I did write in a name, should I go for a fictional character?  James T. Kirk is a strong leader.  I’d consider a cartoon character, but we’ve already got one of those on the ballot.  Maybe a past, dead President?  I hear zombies are all the rage, anyway.  Laura says she’ll write in my name, explaining “If you’re elected, we both know who’ll really be President.”  Funny,  but true.

All I can say is thank heaven for Netflix and caller ID, so I have a slim shot at spending the rest of 2016 avoiding commercial television and robo-calls.  I’ll just try and pretend there’s no election happening at all.  In fact, the only thing that’s more depressing to think about than the upcoming campaign cycle is the four long years that will follow it.  As Simon and Garfunkel sang, “Any way you look at it, you lose.”