Deal With The Devil

Well, we all knew Pat Robertson was a nutjob, but with the death of his chief rival Oral (“Satan threw fireballs at me in my kitchen”) Roberts, the CBN founder seems intent on securing once and for all the title of Looney Toon Numero Uno.

Having already described Hurricane Katrina as God’s revenge for the practice of abortion and on another occasion warned that He would send tornadoes and meteor strikes in retaliation for Gay Day at Disneyland, Robertson now says the horrific quakes in Haiti are payback for a pact the nation once made with the Devil.  No, seriously, you can see him say it right here.

You know, I’m all for freedom of speech and religion, but there comes a time when you have to consider putting a guy into the Old Folks Home for his own good.  Every day this guy is allowed to sit in front of a camera is a day he’s only hurting himself and everyone around him.

Meanwhile America’s experiencing some buyer’s remorse of its own as polls show a majority of voters think the Obama administration is on the wrong track, and would vote him out of office if the election were held today.  In the interests of fairness this largely has to do with the sorry state of the economy, and based on that criteria Ronald Reagan looked like a dead duck a year or two into his first term, only to secure a landslide re-election in ’84.  Thus it might take a sustained slump of another 3 years to force Barry out, but I’m confident he can manage it.

In the meantime, watch what you say because Big Brother is watching and his reach is getting longer every day.  Now, I’m not saying speaking out will bring hurricanes and earthquakes, but Joe Biden has been known to have a quick temper. 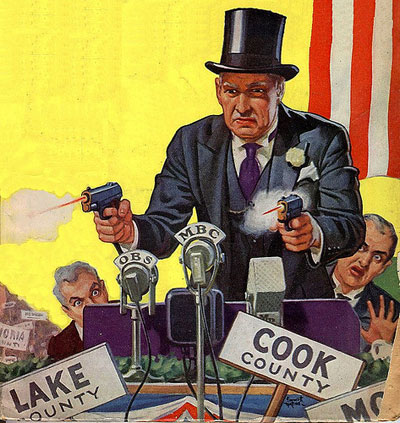