Fifty years ago today on January 12, 1966, Batman premiered on ABC television.  I was nine months old.  The show ended its network run in March of 1968, just before I turned 3, so it’s safe to say I probably missed the whole thing.

Still, as noted in an earlier post, the pop-culture tsunami that was 60s Batmania left in its wake scads of colorful bat-merchandise that filled the toyboxes of my friends’ older siblings.  So it was that through items like the Remco Batmobile Dashboard toy and Topps’ trading cards painted by Norm Saunders (specifically one showing a rescue via Batplane) I was introduced to the Batman character, which in turn led to the comics and eventually back to Adam West. 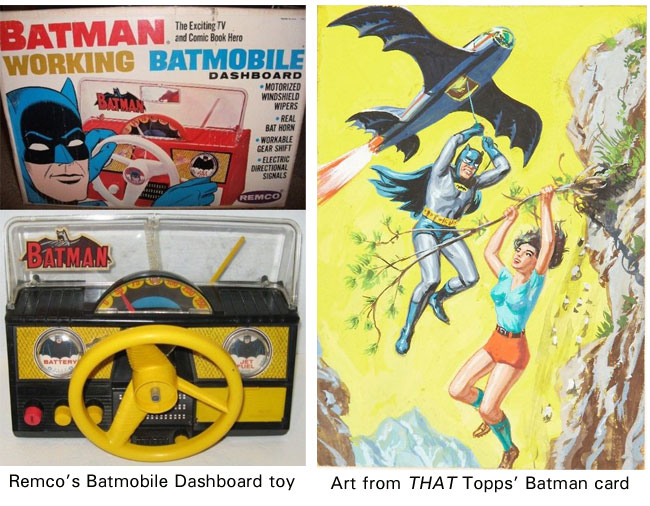 It wasn’t until the early 70s that I finally got to see the “live action” Batman, thanks to a television broadcast of the 1966 motion picture featuring the same cast, sets and vehicles used on the show.  I think it’s fair to say it blew me away. Up until then, the only live action superheroics I’d seen were The Adventures of Superman, which I loved, but as awesome as George Reeves was, in the end he was always stuck rounding up two-bit gangsters, con men and bank robbers on a shoestring budget, compared to the comics, where he battled fantastic super-villains and alien invasions and moved whole planets with his bare hands. I had learned to set my expectations pretty low, so when Batman showed up I was awestruck.

Here, suddenly, was a flesh-and-blood Caped Crusader and Boy Wonder, duking it out with honest-to-gosh comic book villains The Joker, The Riddler, The Penguin and Catwoman, tooling around in an actual Batmobile, Batcycle, Batboat and Batcopter and hanging out in a huge and wonderful Batcave. Where George Reeve’s Superman was the only really remarkable element/character in a typical 50s adventure show,  Batman was a comic book brought to life, with characters, settings and situations that had only existed on gaudily-colored pulp paper before. For an eight-year-old, it was pure awesome.  If we’d had a color TV set, I’d probably have had heart failure. 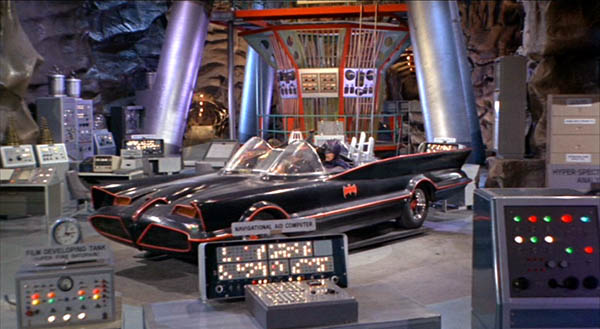 Flash forward a couple more years and the show itself aired in syndication on a local TV station.  If anything, it was more amazing than I remembered the movie being, and certainly the whole enterprise was more effective in half-hour installments.  These days Batman always seems to air in two back-to-back episodes; the first ending in a nail-biting cliffhanger and the next resolving the crisis.  I preferred it the way I got to see it, spending the 24 hours between chapters in total suspense until another school day ended and I could run from the bus stop to have my fears allayed.  How were the Dynamic Duo going to escape that huge cake made of quicksand (and how does one make a cake out of quicksand)?  Can Bruce Wayne save himself from going over the cliff on that runaway stretcher? Did that giant clam really swallow Robin? Half the fun was arguing with your classmates about just how the latest peril would be resolved (and knowing no matter how crazy the kids’ solutions would be, the show’s writers would deliver something even crazier).  On the other hand, in those pre-VCR days, you always ran the risk of never seeing the end of the story if you were held after school, or the bus ran late, or your folks wanted to take you somewhere.  And then there was that occasional super-long wait when “part one” aired on a Friday. 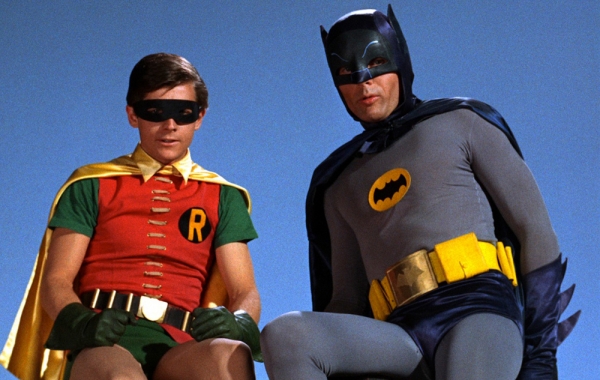 I was just anal enough to be bothered by the details they got “wrong.”  Batman and Robin’s utility belts looked different from the comic-book versions, Bruce Wayne’s hair wasn’t dark enough and, hey, was that a mustache on the Joker? But compared to what Hollywood had in store for Batman further down the road, the TV show was a model of fidelity.  In the first, best season, that’s where the comedy came from; situations and dialog that passed for acceptable on the comic page became outrageous and hilarious when acted out by flesh-and-blood actors, transferred as opposed to translated from the original medium.

For years after it left the air, Batman was despised by comic book fans who saw it as an insult to the character and the comics medium in general.  Certainly it was frustrating that every comic-related news article typed by every lazy journalist for decades started with “Zap! Bam! Pow!”  Personally, I never lost my affection for the show, even though the comic book Batman of my era was the darker, spookier version drawn by guys like Neal Adams and Jim Aparo.  Hey, I grew up with the original Star Trek and the Roger Moore version of James Bond, so I developed a taste for cheese early on.  Plus you had to love deathless dialog like this:

“I’ve heard that song before, Catwoman.  The last few bars are always the same.  The criminal is always behind them.”

Eventually, enough other versions of Batman came along, many of them dark and brooding and humorless, that the Adam West version seemed less threatening to fanboys.  Today the show is widely loved for what it is — harmless entertainment and a time-capsule of another era — while Mr West himself, type-cast and employment-challenged for years after Batman, has evolved into something of a pop-culture icon. 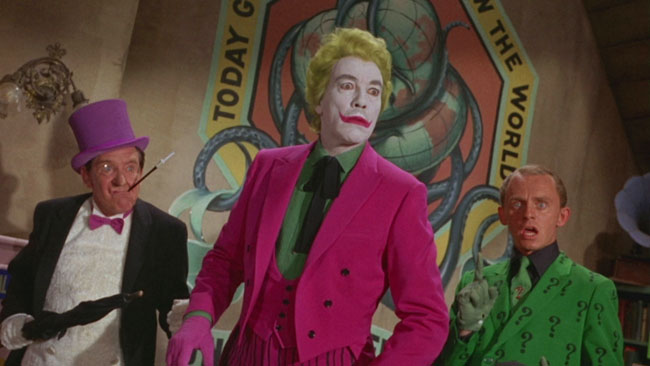 I confess the show doesn’t have nearly the same hold on me now that it did in childhood.  Once you’re out of grade school, you can see it’s basically a one-joke concept dragged out for 120 episodes.  Plus, after you’ve seen them all a few times, the law of diminishing returns factors in.  What’s fascinating is that my kids are totally indifferent to the whole thing; they can take it or leave it.  But I suppose here in the 21st century, where scores of celluloid superheroes fly around with magic hammers and hi-tech armor in films with budgets larger than the gross national product of some countries, the TV-scale adventures of a non-powered guy in a leotard and satin trunks aren’t as impressive as they once were.  In my day, though, it was slim pickings; almost no one considered comic books worthy of adaptation to the screen, let alone sure-fire money-makers, so discovering a show like Batman, replete with with otherwise respectable (even famous) grown-up actors dressed in spandex and capes, trading punches on outrageous sets that even a kid could tell cost a lot of money, was like getting an extra Christmas.  At the time, I was convinced it was the whole reason they’d invented TV in the first place.

If nothing else, Batman taught me life lessons that have stood me in good stead all these years: never operate a vehicle without fastening your safety bat-belt, be sure to drink your milk, mind the rules of proper grammar and don’t go anywhere without a full can of shark repellent. 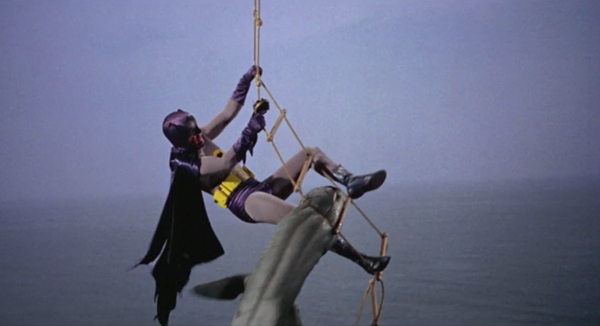