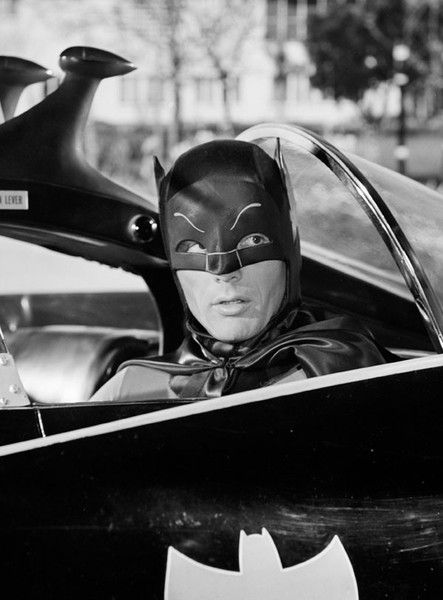 This is shaping up to be one lousy year. Mere weeks after the death of Roger Moore,  I’ve lost another childhood hero, Adam West.

As related in an earlier post, I first encountered Mr West’s Batman in a television airing of the 1966 feature film starring the cast of the TV show.  It’s fair to say it blew it my young mind, with its outlandish sets, gadgets, vehicles and costumes.  It was, in essence, a comic book brought to life.  A couple of years later, the show itself turned up in syndication and watching it became a highlight of my daily routine.

I would’ve been about 9 when I saw the movie, maybe 11 or 12 for the series, so I may or may not have caught on at first that it was all a gag.  Not that it would have necessarily mattered: I knew Get Smart was played for laughs but I still viewed Max as a hero, and when Uncle Arthur put on a Superman costume and flew around the neighborhood on Bewitched, I didn’t think “that’s hilarious” (as the laugh track seemed to encourage) but rather, “Wow, I wish my Superman suit made ME fly.”

Similarly, even if I realized that the central joke of Batman was what a square the caped crusader was — that he was a postmodern lampoon of straight-shooting, tea-totaling heroes like Clayton Moore’s Lone Ranger (with a similar delivery) — it wouldn’t have mattered to me.

There’s a really great post at NPR that sums up my own experience with the Adam West Batman; like that author I was a kid devoted to law and order and rule-following.  As a toddler I lectured strangers on the perils of smoking and chastised my grandfather for improperly disposing of litter.  Neighbors said I wouldn’t get out of my pedal car until I’d properly parallel parked it next it to the house.  Naturally I’d be a sucker for a hero who ordered orange juice in a nightclub and refused to start the Batmobile until Robin had fastened his safety bat-belt.

As has been noted endlessly everywhere, Adam West’s portrayal of Batman was aimed at two audiences;  kids who took him deadly serious and their parents who chuckled at his cornball earnestness.  The interesting thing, for me, is that even though in the short run the bread and butter of the show was in that older audience, who after all were the potential customers for the show’s sponsors, in the long run it’s the younger audience that’s defined the show’s legacy.  For years, I’ve frequented a message board devoted to ’66 Batman and its members aren’t the least bit self-conscious about declaring this Batman as their personal hero.  His straight-laced morality may have been the butt of the joke in ’66, but it’s made him a role model to generations. 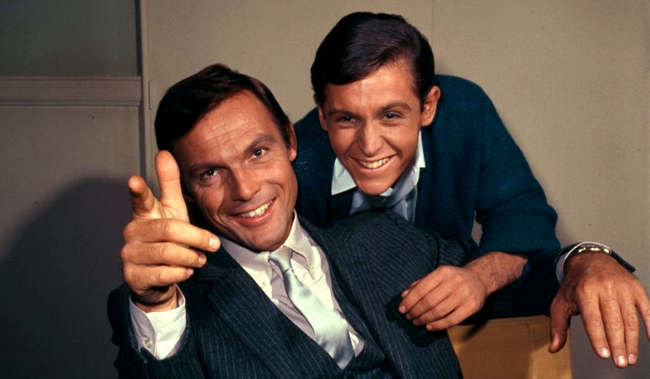 I believe this is the genius of West’s approach; it would’ve been easy to aim for full-on comedy with the role and make Batman an utter doofus…and maybe that would’ve helped the actor keep the character enough at arm’s length to have shed the image when the show was canceled…but by adding that layer of earnest sincerity, he ensured the longevity of the show through the younger fans.  Because as sure as we may have been in ’66 — and are today — that we’re above corny ideals like “fair play” and “good citizenship” and the like, the truth is every generation is hungry for heroes who understand there are such things as “right” and “wrong” and are willing to step up and do what’s right.  The Lone Ranger and Hopalong Cassidy generation got that kind of hero straight up and without irony.  Kids of the 60s and 70s happily settled for a Batman who was cut from the same cloth even if Mom and Dad did laugh at him.

After the show was cancelled, Adam went through a long rough patch, career-wise, having been typecast as a caped crimefighter at a time when live-action superhero projects were rare as hen’s teeth.  People only wanted to see him as Batman, so with a family to feed he packed up the cape and cowl in a traveling case and made the rounds of car shows, county fairs and mall openings, playing the Caped Crusader well into middle-age.  In the time-honored tradition of kicking a guy while he’s down, he was mercilessly parodied for this and held up as a kind of cautionary tale for actors nervous about taking on similarly iconic roles.  But to his eternal credit, he never gave up and never lost his sense of humor, poking fun at himself and turning his public persona into sort of 24/7 in-character performance: “Adam West” the kooky eccentric.  It won him a new generation of fans and gave his career a second wind as a celebrity spokesperson, voice artist and frequent guest star “as himself” in the grand tradition of Hollywood legends who end up “famous for being famous” long after we forget what they were originally famous for.  If anyone ever had a reason to resent Batman and want to bury him, it was this guy, but he remained a fan and champion of the character until the end, which was awesome. 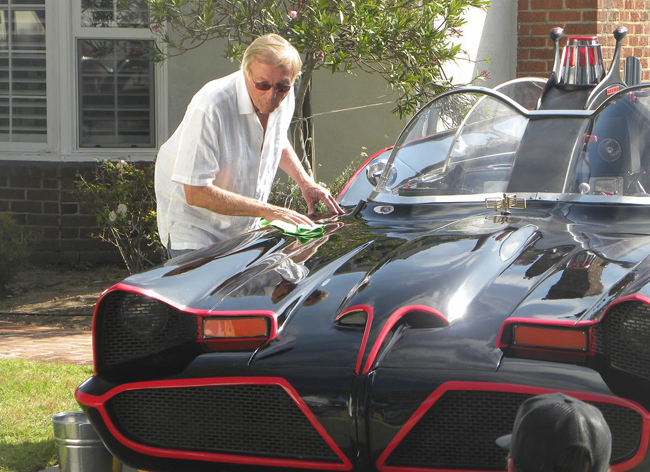 It’s hard watching these icons of my youth exit the stage one by one, and I know it’s not over yet.  But if there’s any comfort to be had, it’s from knowing that as long as there’s reruns and DVDs and Blu-Rays and Roku and Youtube and whatever comes next, they’ll live on, forever young and vital and handsome and courageous.  Somewhere out there right now on a screen somewhere in the world, the Caped Crusader is racing into action in the Batmobile, figuring his way out of a nefarious death trap, stopping for a lecture on traffic safety or good nutrition.  And that’s as it should be.

Still, it’s hard not to feel it’s a dark day in Gotham, with that red phone beeping away unanswered.

One thought on “Adam West RIP”