Recently, as I was walking across campus to my car, I found myself fascinated with a telephone pole I’d passed hundreds of times without giving a second glance.  It stayed in my thoughts on the drive home, so the next day on the walk to the office, I stopped to take a picture. 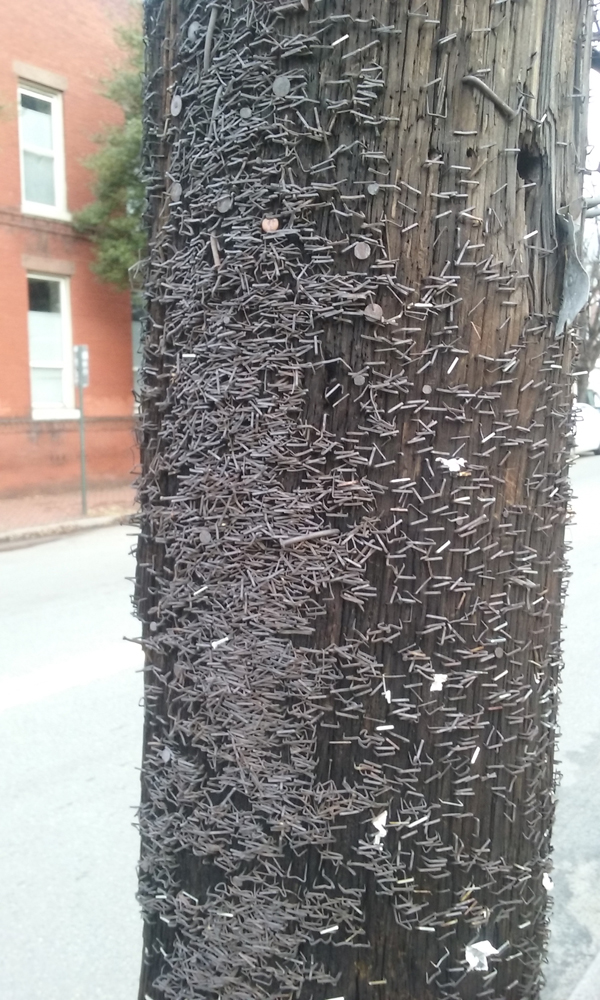 What struck me was the thought that there’s a whole generation of students on campus who, if they stop to look at this pole at all, probably have no idea why it’s densely covered with rusty old staples.  Of course, back when I was a student here, in the primordial past of the early 80s, the pole was covered with handbills, broadsheets and assorted missives from about two feet off the ground up to the 7-foot mark, all of them fastened on with those staples.  You can see where some folks finally gave up on trying to drive in staples on top of staples on top of staples, and resorted to hammering their messages up with nails.  Located in a high traffic area between lecture halls, this was a popular pole.

I remember tons of papers plastered on poles at every corner of campus, ever changing and yet always pretty much the same.  “Come to the big party,” they said. “Don’t miss this awesome band.” “Buy my car — cheap!”, “Join our club.” “Vote for me.” “Roommate needed.”  “Have you seen my dog?” “Would you like a puppy?” “Used textbooks for sale.” And on and on.  I remember homemade ads with amateurish doodles and murky black and white photos, duplicated at corner print shops on paper that came in colors like “canary yellow”, then tucked under someone’s arm in a thick stack, with a fully loaded stapler in one hand to engage in the 20th century version of “self-publishing.”

One flyer you could always count on was the one that read, “Let me type your term paper. ”  Back then, typing was a relatively rare skill, one you could use to drum up a few extra bucks.  In my Freshman year, I had to take a typing test before I could sign up for Journalism classes; if I’d failed, I’d have had to pay for a Typing class.  Today, there’s no way anyone could show up at college without typing skills; kids are texting before they’re out of diapers.

At the bottom of the homemade “typing” ad would be a carefully scissored fringe of  “contact info” tags to tear off and take with you until you could get to someplace with a phone.  I mean, it’s not like your phone cord could stretch all the way out to the sidewalk, right?

This set me to thinking about all the things that were once so ubiquitous, but somehow at some point just faded away entirely, things I never paid much attention to until I noticed they were gone. Typewriters, for one.  Pay phones.  Rotary dials.  Fax machines. Fotomats. Is Kinkos still around?  So many things that filled a need no one has any more. Nowadays you can post your announcement to the Web instantly and reach more people than you would have with a thousand broadsheets stapled to a thousand poles.  Every club, band, school, neighborhood, hobby or perversion is represented on Facebook or Twitter or Craigslist.  You can offer up your old couch at 1PM and have it gone by 1:30.  Progress, right?  Why look back?

My problem is I’ve always been fascinated by ephemera, all that printed matter tied to a specific moment in time, briefly accessible or even ubiquitous, then consumed, discarded and forgotten: comic books, pulp magazines, newspapers, event posters, and the like.  These homemade handbills would be the ultimate example of that: briefly relevant (to someone, anyway) but soon just an outdated, fading, rain-sodden eyesore left fastened to a pole.  Now there’s just the staples left, but every one of those staples held a story, once.  Did someone decide to go that concert and end up meeting the love of their life? What happened to the previous roommate, anyway? Did that search for the lost dog end in relief or sorrow?  And what about the people who pounded in those staples; students before and after me?  What twists did their lives take after that moment at the pole? Did they graduate or drop out?  Are they alive or dead?

While I was standing there, pondering the mysteries of these phantoms and taking a picture of a cluttered-up telephone pole with my cell phone, my boss walked up behind me and said something that put it all into perspective.

“Shouldn’t you be at work?”