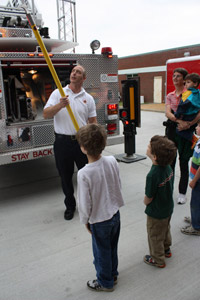 I’m way behind on this one, but what else is new?

On April 24, we took the kids on a homeschooling field trip down to Fort Eustis to visit the fire station, and it turned out to be really cool.  The kids were excited to meet real firefighters, and I got the distinct impression the feeling was mutual.

The fun started with a demonstration of the ladder truck in action.  They raised the ladder to its full 150-ft height and had one of the firefighters climb to the top to wave down to the kids.  Then the ladder was rotated 90 degrees and lowered to form a  “bridge” from the truck to the firehouse, for a firefighter to walk across.

Next came a rundown of the various firefighting tools and a 30-minute video on fire safety.  Jason was excited to acquire new facts for his trivia-drenched mind (at 1200 degrees Fahrenheit, everything in your house that can burn will burn).

The highlight of the day was, no doubt, the rides the kids were given in a firetruck.  Since we were on an Army base, which is more or less its own little self-contained world, it was possible to make several runs so everyone got a turn, and Laura even got to run the siren and blow the air horn to her hearts’ content.  One can only imagine what chaos would be caused by 7 or 8 runs like that in the city. 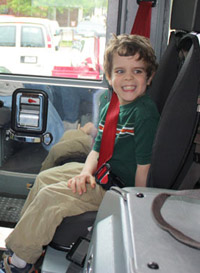 After that came a pizza lunch with the firefighters, and a chance to practice evacuation procedures from a “burning” trailer.  Also available for exploration were an ambulance and police car.

As an added bonus, the boys and I got to ride in an electric car, one of two provided for the fire station as part of the government’s efforts to “go green.”  This one was used by the fire chief to make his rounds and conduct inspections on base.  It was amazingly quiet, practically silent, and not too bad a ride despite having suspension as rudimentary as that of the average go-kart.

For her part, Grace enjoyed flirting with the firemen, with Mommy’s friend Miss Heather and her boy, Liam, and especially with “Patches,” a robot dalmation in a remote-control firetruck, operated by a fireman hidden away in an office, with a microphone that let him talk to Grace.  (“Hey, Grace…touch my nose!  Ah-Choo!”).

In all, it was a great way to spend a Saturday and certainly an outing the kids will remember for a long time.  So, a belated thanks to the guys at Ft Eustis Fire and Emergency Services.  We had a blast! 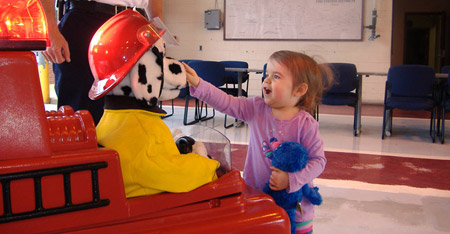 I always seem to start these posts off with a phrase like “impossible as it seems…” but doggone it, it really is hard to comprehend how your kids can go so quickly from tiny little newborns to…well, in Jason’s case, seven years old! 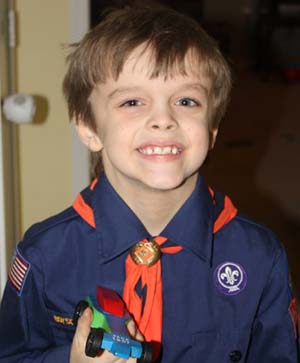 I still remember the surprise I felt the  morning of April 15, 2003, when Laura told me it was time to go the hospital (three weeks ahead of schedule)  and how we dropped our tax return in the mailbox on our way out.  And of course I remember what a bundle of nerves I was, convinced I was going to humiliate myself by passing out in the delivery room, only to end up being thrilled by the whole experience and getting really into it.  And I remember Jason, lying quietly under a warming lamp seconds after being born, checking out his new surroundings with a serious stare and giving the first glimpse at what we’d come to know as his inquisitive, analytical brain.  (I’m thinking, “Cool, he’s not a screamer” while the nurse is taking points off his APGAR score).   And then his eyes locked on mine, as if to say, “You! This is all your fault!”

It occurs to me this blog began pretty much when he did, with a post to share the results of our first ultrasound with friends and family.   Over the years, I’ve tried to use this space to record Jason’s adventures, sayings and accomplishments, but I haven’t been nearly as good about it as I intended.

Suffice to say Jason’s made me a very proud Dad since the day he got here.  He’s a sweet kid with a big heart and lots of love and patience for his little brother and sister.  He’s got a great mind and a goofy sense of humor, and naturally he’s terribly handsome.  In the last year, I’ve particularly enjoyed watching him blossom as a Cub Scout, showing good manners and respect to his leaders and fellow scouts and tackling his various badge requirements with real dedication and effort.

Happy birthday, Jason, and thanks for showing up early that mid-April morning in 2003 to kick off seven years of good luck for Mommy and me.  We’re looking forward to the next seven just as much.

I was having a discussion with Jason the other night while he brushed his teeth and got ready for bed.  He noted that the North and South Poles of Earth have actual magnetic properties.  I mentioned that the Earth’s magnetic field is generated by its molten core, and that it’s existence is probably what keeps our atmosphere from being ripped away by solar winds.  In fact, some experts believe that when the core of Mars cooled, its magnetic field disappeared, causing a loss of atmosphere in just this way.

As I tucked him into bed, Jason said, “Solar winds would blow our house away easily, then.”  I asked, “You think so?” and he answered, “Yes, because scientists estimate the weight of the atmosphere is 5,630 trillion tons, so if solar winds blew that away, they’d blow our house like a quadrillion miles into the Universe”

“You’re probably right,” I conceded, and said goodnight.  And that’s why I’m giving up trying to impress my 7-year-old with science trivia. 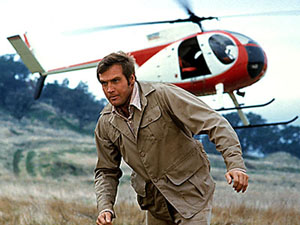 Wow, even for a guy who runs in slow motion, this has been a long time coming.

For about as long as we’ve had DVDs and the internet, I’ve been haunting the “TV Shows on DVD” website, hoping to see news that The Six Million Dollar Man would soon be available for home viewing.  Alas, for all those years the rights were entangled in a hopeless muddle over who owned what.  Some studio or other bought the rights to Martin Caidin’s original “Cyborg” novel and with it characters Steve Austin, Oscar Goldman and Rudy Wells, and certain other key concepts, the aim being to do a big-screen remake…which never materialized.   The Bionic Woman faced similar issues, but since Jaime Sommers was created for TV (and not by Caidin), they were able to use her name and the show title to do NBC’s ill-fated (and frankly awful) remake in 2008, though it meant changing the whole definition of “bionic” to do it (“Bionic” now meaning “as much like Jennifer Garner in ‘Alias’ as legally possible.)

So anyway today I’m doing one of my periodic checks of old bookmarks, trying to weed out the ones I don’t need, and what do I find at tvshowsondvd but a headline saying that yes, SMDM (and the Bionic Woman, but who cares?) are being prepped for DVD, those thorny legal issues having been finally resolved (probably due to a studio collapse…finally something to thank the recession for!).

With any luck, by Christmas or sometime early next year, I’ll be able to share this show with my boys so they can finally see what their old man’s been prattling on about.  (And let’s face it, we’ve got a narrow window, here; if they get much past 7 years old, it probably won’t impress them much.)  If I can spot them out in the backyard even once, staging a battle in slow-mo and going “Chh-chh-chh-chh-chhhh…” it will have been worth the wait.

And what the heck, if Grace feels left out, I can always bring home The Bionic Woman.

Scott recently told Mommy he’d like to change his name to Big Boy.  “Big Boy William Morefield?” she asked, trying it out.  “No,” he explained, “I need a new middle name, too.”

And that would be?

At least we don’t have to worry about self-esteem issues with that kid.

April’s here and with it comes terrific weather.  Today we’ve got clear skies and temps in the 70s, with 80s expected tomorrow and Saturday.  Flowers are blooming, leaves are budding and birds are singing.  Nice to break out of the winter doldrums at last.