Pinewood Derby is always a highlight of the scouting year and this time Scott got in on the fun as a Tiger. Luckily we dodged the sibling rivalry as each of them took first place in their respective dens. 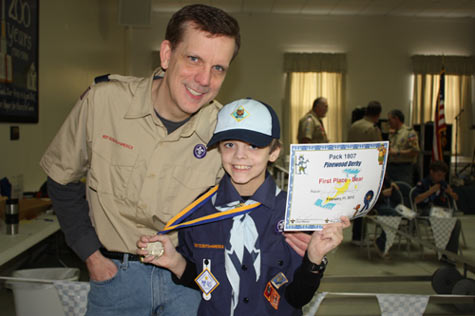 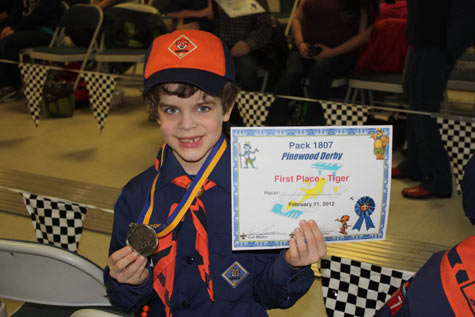 I didn’t have much luck this year catching snapshots of the action, partly because I had the camera in the wrong mode and only figured that out towards the end of the day. But there was this one fun image from the finish line of one of the Tiger heats, with the nose of Scott’s #49 car just slipping into focus in Lane 2. 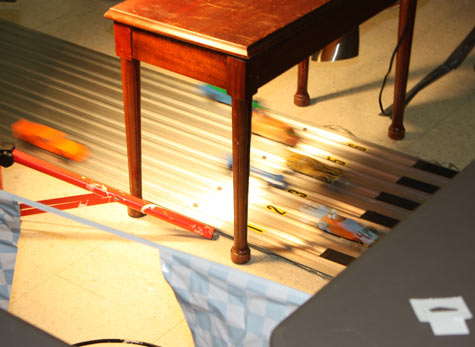 Jason also took “best design,” which for me was the coolest part, since he put a lot of thought and labor into bringing to life his vision for the car. He was determind to work in flames from the “exhaust” and a pair of lighting bolts on top, the latter presenting no end of headaches until we finally settled on cutting them from yellow craft foam and gluing them on. If it had been up to me, I’d have given up on those things pretty early on, but I have to admit they did give it a unique look.

Scotty’s plan was simpler; copy the design of the car he built last year, but was unable to race. Jason’s other new trick this year was to tape off sections for cleaner paint lines, though Scott was in too much of a hurry to go through all that. Topping off both cars were plastic “Halo” action figures.

At the end of the day, both boys finished in the Top 10, time-wise, and Jason’s only regret was that he didn’t get a better look at the car that beat him out for fastest-in-the-pack. Every year he incorporates elements from every car that outdoes his, and now his schemes are thwarted.