Well, this is mortifying.  Somewhere along the way I turned into THAT guy.  You know, the guy who starts a blog and proceeds to neglect it for months at a time.  The guy who makes you wonder why you bother checking his site when you know going in there won’t be anything new to read, and sure enough there isn’t.

To the three or four of you who make up my loyal readership, I apologize.

Oh, I’ve got tons of excuses, none of them particularly interesting or worthy of sympathy.  Suffice to say life gets distracting at times.  But I hope to do better in the future.  One thing that may help is that I finally realized I can’t run multiple sites at once, so I mothballed my Superman fan site and decided to consolidate this blog and the site I made for the kids.  That one’s always been a headache, as people are always anxious to see new photos, but I never did find a format that worked.  Last year I set it up so I could display galleries with pretty, Flash-like animations, but it turned out to be insanely complicated, requiring the creation of two new hand-coded XML documents and a javascript every time I wanted to add a gallery, or even append a new photo to an existing gallery.  So I ended up putting off the chore until I fell so far behind it would take a solid weekend to catch up.  And I like my weekends.

So I finally figured since it’s such a pain to add photos to that site, and since this blog never has any new content, why not post photos here as blog entries, and thus kill two birds with one stone?  Genius, right?  Sure glad I spent that money on college.

Anyway, the first order of business is to catch up.  When last I posted, Jason was riding a high as champion of his age level in the Pinewood Derby.  That lasted all of a week, until he went down in flames at District competition.  I’m not a fan of the District races, and not just because he’s never won.  There’s a decided lack of camraderie at those events, and a lot of frayed nerves and tears.  Typically the boys go home as they’re eliminated, so by the end there’s no one left to cheer for the winners.  And don’t get me started on the Dads.

The good news is he got to go with his friend Jared, who’s turned out to be a bosom buddy this year.  Jason, Scott and Grace have been getting together with Jared and his sister Kendall once a week for all sorts of adventures and it’s been a lot of fun for everyone.

In April, Jason celebrated his eighth (!!!) birthday and Laura and I made him, at his request, a “Foxtrot” cake, featuring the star of the strip, Jason Fox, who besides sharing a name is also a math geek like our firstborn.  So we included the message “Happy ?64th Birthday,” which he loved. 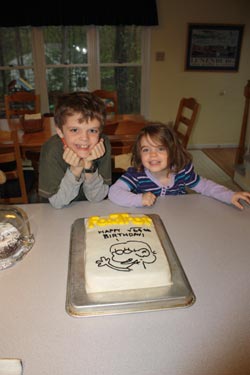 Both the boys took tennis lessons in the Spring, and had a good time with it.  Gracie was relegated to the sidelines, but in May, we traveled up to Ohio to spend a week with Grandma and Grandpa Jim, and Grace finally got her turn on the court. 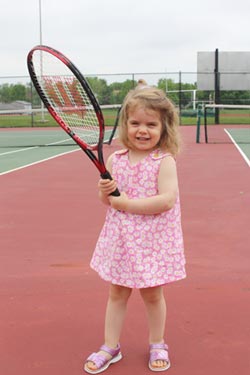 Since then, we’ve been enjoying a lazy summer at home, except for a long weekend in D.C., where we hung out with Laura’s cousin Toni (on break from teaching in Damascus, Syria). The kids had a good time seeing the dinosaur bones, animals and gems in the Smithsonian’s Natural History Museum, but they were played out once we got a few minutes into the National History building.

One bright spot for the kids this summer has been the discovery of Sweet Frog, a yogurt shop offering several flavors that are safe to eat even with all their allergies.  I’d never heard of the place until a couple months ago, but now they seem to have sprung up (ahem) all over the place. 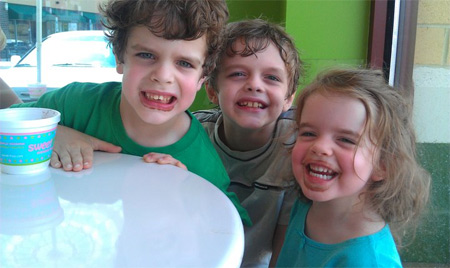 Right now the boys are heading into a week of tennis camp and Jason is beginning new swimming lessons soon (the first go-round a couple years ago having proven a bust).  I’ll write more as it happens…I hope…and try to “dump” some photos from the last few months as I’m able.

One thought on “Miss Me?”