In the spring of 1973, ABC television aired a made-for-TV adaptation of Martin Caidin’s novel, “Cyborg,” introducing Steve Austin to millions of viewers and launching a 70s pop culture phenomenon. 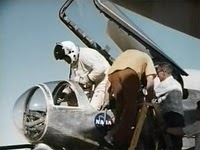 The film opens with ex-astronaut Austin suiting up to pilot an experimental aircraft at a desert testing ground, while hundreds of miles away in Washington, DC, OSO director Oliver Spencer holds a secret meeting to propose the creation of a top-secret superweapon…a cyborg, part man and part machine.  The estimated cost? Roughly six million dollars.

“Will you ask for volunteers?” someone asks.  “No….” says Spencer casually. “Accidents happen all the time.  We’ll just start with scrap.”

Spencer gets his human scrap pile when Austin’s aircraft suffers a catastrophic crash, leaving him mutilated and near death, a triple amputee with extensive internal injuries.  Judging Austin a suitable candidate for his project, Spencer directs the brilliant surgeon Dr Rudy Wells to make good on his theories of “bionics,” replacing human parts with mechanical duplicates capable of doing anything the originals could, and more. 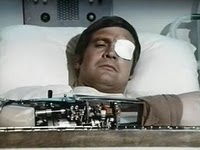 Austin has a hard time accepting his fate, at first repulsed by the sight of his new limbs, but in time he adapts to his bionics and the amazing power they give him. Then the other shoe falls as Spencer asks Steve to make good on his debt by taking on a special covert mission for the OSO.

Steve reluctantly agrees and parachutes into an Arabian desert on a mission to rescue a kidnapped Israeli dignitary.  He soon finds out what Spencer knew all along; the man he’s been sent to rescue is already dead.  With Austin now in the hands of Arab terrorists, Spencer — back in Washington — confesses his duplicity to Rudy Wells: This has all been a test to determine Austin’s resourcefulness and will to survive. “If he fails, I can always build another cyborg. But if he survives — which appears to be doubtful — then I know I have my man.”

Steve does survive, of course, escaping his captors and blowing up half the terrorist camp on his way out.  Back in the States, Dr Wells induces a sleep state in Steve to speed his recovery from injuries, and Spencer asks if it’s possible to just keep him asleep until he’s needed again, a suggestion Rudy finds abhorrent.

“Cyborg” was a ratings hit when it aired, earning a Hugo Award nomination and spawning two sequel TV movies and a hit weekly series that ran for five years.  As a medical/sci-fi drama it remains an entertaining bit of television.  For fans, it offers some fascinating twists on the Six Million Dollar Man story as we’d come to know it.

For one thing, Oscar Goldman is nowhere in sight, replaced here by OSO chief Oliver Spencer, a hard-hearted, ruthless man on the surface but — as played by the late great Darren McGavin — one we sense is more complex than he first seems.  Spencer hits Steve with what we might today call “tough love,” refusing to show him any pity or tiptoe around his feelings, and forcing him to accept his new life as a cyborg  and put his abilities to use in a cause. 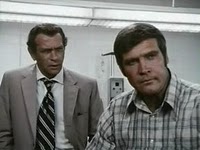 Someone — possibly McGavin himself — elected to have Spencer walk with a limp and carry a cane.  No reference is made to what led to this infirmity, but it adds a subtle subtext to Spencer’s plot to build a bionic man, and perhaps to his gruff demeanor.  “You’re more of a robot than I am,” Steve says bitterly.  “You should have been me.”  Without missing a bit, Spencer agrees: “Yes, that would have been simpler,” earning a surprised look from Steve.  Harsh as he is, Spencer emerges as a fascinating character who never fails to make sparks with Austin in their scenes together. Arrogant and tactless, he’s like a spiritual forefather of Hugh Laurie’s “House” character.  It would’ve been fun to see Spencer hang around, rather than step aside for the comparatively bland Oscar Goldman, but then if McGavin had stayed on we’d never have gotten “The Night Stalker.”

Still not quite the self-confident, square-jawed hero who will launch a thousand toys, Steve Austin in this film is a complex character.  We first see him sauntering casually onto the tarmac of an airfield, nearly late for a test flight.  His mind is on his days as an astronaut, and we sense his life is starting to drift off target.  After the crash, he attempts suicide on finding himself a triple amputee.  Later, even though his bionic limbs look identical to the originals, he still considers himself a freak, and when he rips open his bionic arm while rescuing a child from a mangled car, the child’s mother reinforces his fears, asking in revulsion, “What are you?”  These themes of alienation and self-loathing will continue to some degree in the next telefilm, but quickly fade as the series gets under way and Steve — and his audience — comes to see his bionic enhancements as a net gain, and even a blessing.

For some reason, the film deviates from the novel by making Austin a “civilian member” of the space program, rather than an Air Force Colonel.  Maybe this is to rationalize Spencer’s scheme at the end of the film, where he sets up an elaborate test of Steve’s patriotism and combat readiness.  Presumably if he were an Air Force officer, those traits would be a given.  Maybe it’s a reflection of the Vietnam War, still in progress when the film aired; it’s possible someone thought a story about a military man made into a super fighting machine wouldn’t generate as much sympathy as that of a civilian forced into government service by circumstances beyond his control. 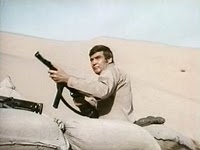 This first film is also more violent than the series would be.  On reluctantly agreeing to take Spencer’s assignment, Steve says, “I don’t want to kill people.”  Nonetheless, Steve racks up an impressive body count in this film, taking out terrorists with a machine gun and grenades in precisely the sort of high-firepower climax the later series would studiously avoid.

Nearly 35 years after it first aired, “Cyborg” (aka “The Six Million Dollar Man”) still holds up as compelling drama and thought-provoking sci-fi.  As an action flic, the pacing can be a bit slow, and the anemic musical score by Gil Melle can’t touch the heroic, jazzy coolness of Oliver Nelson’s work on the series proper, but all in all, this is a solid 90 minutes or so of entertainment.  IF, that is, you can get your hands on it. Hopefully Universal will work out the legal issues keeping this and the rest of the Six Million Dollar Man saga out of reach of DVD collectors here in the United States.