I didn’t grow up as a fan of Stan Lee.

In fact, it’s fair to say that as a kid, I didn’t “get” Marvel at all.  Weaned on Superman and Batman, I viewed superheroes as unflappable paragons of confidence, competence and moral certainty, whereas Marvel’s heroes were conflicted, insecure, short-tempered and at the end of the day not always even sure they were in the right.  On meeting each other, their first impulse was to trade punches; even when they cooperated, they bickered and griped.  More than that, Marvel the company was flagrantly, brazenly after my money.  Individual issues of their comics almost never told a complete story, being just chapters in sagas that had begun long before I showed up and would end…well, maybe never.  If you bought a Spider-Man book, you were apt to be presented with a guest appearance by Daredevil or the Human Torch or some other character in the middle of a story of their own; if you wanted to fully understand what was going on, you had to go buy their book, too.  Marvel wasn’t satisfied with just some of my money, they wanted it all, and even if I obliged, I probably still wouldn’t get a complete story.

A banner across the splash page of all Marvel books yelled, “Stan Lee Presents…”  putting a name to the mastermind behind this Machiavellian money-grab, doubtless a corporate mogul who sat like Uncle Scrooge in a vault piled high with quarters coaxed from the pockets of me and my pals and millions like us.   At this stage of the game, Stan wasn’t really writing stories for the comics, so I only knew him as that guy “presenting” everything, and I only “heard his voice” through his “Stan’s Soapbox” editorials, which often as not could be summed up as, “We’ve got another book out, so what are you waiting for? Go Buy It!”  There was just a shameless hucksterism to the guy that rubbed me the wrong way.  After about the hundredth time I saw Stan use the word to close out a column, I finally asked my Dad what “Excelsior” was, and he laughed and said, “Wood shavings!”  Somehow that fit my impression of this guy who was selling us a bill of goods. 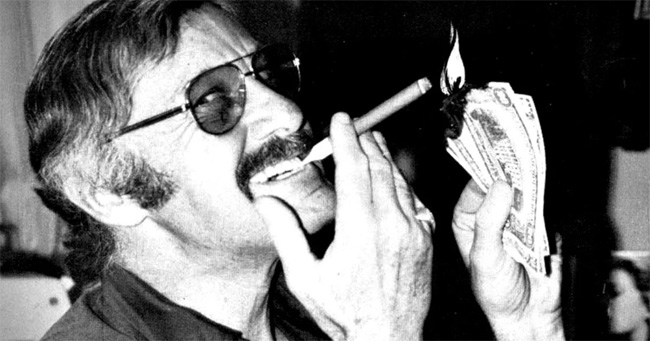 But then in the late 70s, things changed a bit for me when a series of paperbacks from Pocket Books reprinted the early adventures of Spider-Man, the Fantastic Four, the Hulk and Dr Strange, and finally I got to “meet” Stan not as a publisher or promoter, but a writer.  That’s when I finally “got” the appeal of both Stan himself and the company he built.  Stan’s Spider-Man took a character that had never appealed to me beyond his cool costume and power set and made him dynamic and funny.  Early Spidey was almost like a parody of conventional superheroes: living in his aunt’s house instead of a mansion, dealing with homework deadlines between crimefighting missions and stuck repairing his own (lone) costume with a needle and thread.  Stan’s successors — writing the 70’s Spidey I saw on the spinner racks — had picked up the baton and doubled down on the misery and suffering while losing the (for me) crucial humor, Stan’s implicit message that even Peter Parker’s Job-like suffering was part of the over-arching. playful poke in the eye to staid, conventional superheroics. With Steve Ditko putting Spidey through insane contortions and Stan providing him with genuinely funny and rarely repetitive one-liners, the first 38 issues of Spider-Man (or anyway the 21 I got to read in those books) became favorites. 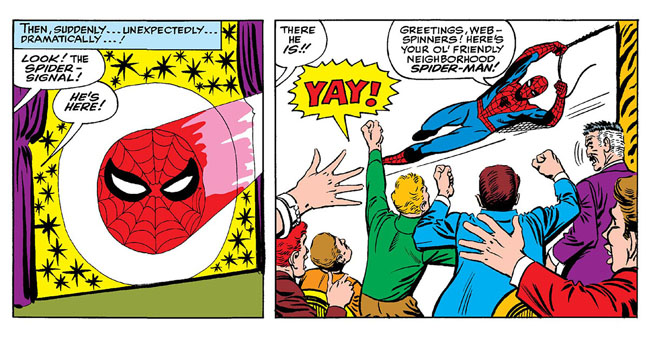 To really appreciate Stan’s contributions, though, you needed to experience the whole comic, not just the story itself.  The letter columns featured lively banter with readers who were clearly loving the opportunity to put in their two cents and see their names in print.  Some of the letters could even be harshly critical, especially of Ditko’s art, which is undeniably an acquired taste, but that didn’t stop Stan (in his “editor” hat) from printing them, anyway.  On the “Bullpen Bulletins” editorial pages, in the lettercols, in the cover blurbs and “editor’s notes” at the bottoms of panels as well as the word balloons and captions, the “voice of Marvel” was consistent in its convivial, inclusive, upbeat and playful approach, and the “voice” was Stan’s.

Stan established the “Marvel style” of comic book creation, which involved supplying an artist with a basic story idea (if even that) and letting the artist plot it out and make his own decisions about how to pace and structure things.  Then Stan would supply all the captions and dialog to flesh out the pictures on the page.  This allowed Stan and his small stable of artists to churn out an amazing amount of content on a monthly basis, compared to the established industry practice of having a writer put down every word as Step One, then provide detailed instructions to the artists on how to illustrate each panel.  Looking at those early books, you can see where artists like Ditko and Jack Kirby reveled in their new freedom to contribute their ideas, but over time these blurry lines between who did what would lead to hard feelings and feuds that played out publicly.

Probably the ideal collaboration, for me, came when Lee and Ditko teamed up for Dr Strange.  Providing a perfect complement to Ditko’s trippy other-dimensional landscapes and bizarre creatures were Stan’s brilliant spells, name-dropping arcane powers, demons, mages and worlds we couldn’t wait to learn more about, and expanding the scope of Strange’s universe by the mere power of suggestion. 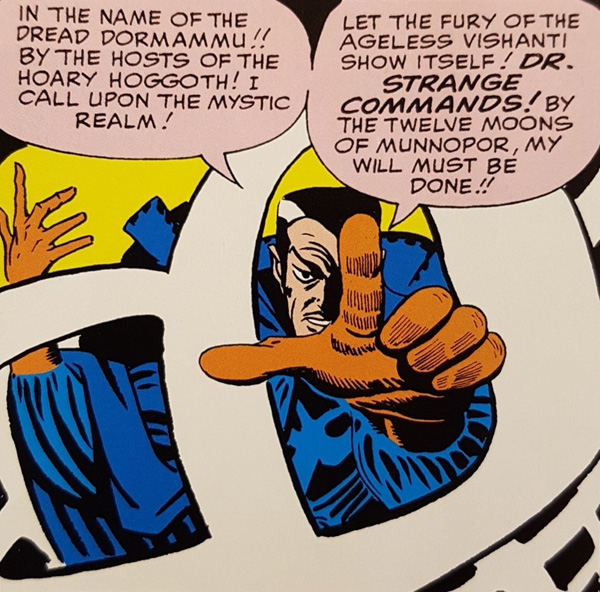 Part of the fun of those early stories, for me, comes in the palpable tension between creators, the sense that artist and writer are pulling in different directions.  There are many times when it certainly looks as if, say, Jack Kirby drew a sequence with a particular idea in mind, then Stan came in and changed the tone and momentum of the scene entirely.  It’s fun to speculate on why he took things in a different direction; did he misinterpret Jack’s intentions?  Did he simply disagree and exercise his power of having “the last word”?  Did he make things better or worse?  People often compare the Lee/Kirby team to Lennon and McCartney, and while it’s far from a perfect analogy, I agree it’s spot-on in one regard: sometimes the pairing of two competing geniuses creates a magic that’s never recaptured after the team splits.

Probably to acknowledge the huge contributions of his collaborators, Stan broke with tradition and ran credits for every Marvel story, letting fans know who wrote and drew them, and for good measure who lettered and colored them, as well.  Just letting us know comics were in fact penciled and inked and lettered and colored pulled back the curtain on how these things managed to appeared on the spinner racks each month as if by magic.  Now when young fans got tired of arguing over whether The Thing could beat The Hulk, they could argue over who the best artist was.  More importantly to the industry, new generations of fans could start considering a career in making these things, themselves.

I confess I gave up buying monthly comics a long time ago, but I still go back to those vintage adventures often, and I find I keep purchasing them over again in new formats every few years.  I continue to be impressed with Stan’s writing, given that he still seems generally regarded as more a PR wizard than an author.  As celebrated as his Spider-Man continues to be, it’s impressive that Stan wasn’t a one-trick pony.  He didn’t try to fit all his heroes into the Spider-Man mold, and he could write in different styles.  The Thing could be as funny as Spidey, but his humor came from a more tragic place.  It was well-nigh impossible to imagine Dr Strange ever making a joke, but he was every bit as entertaining to me for all his sober-mindedness.  And while Daredevil could sink into Parker-like depressions and even the old-school Captain America tended to mope about his dead sidekick, The Mighty Thor had a wonderful lust for life and couldn’t have been happier to be who he was.  (The arrival of cosmic threats that would have had Superman thinking, “I’ve never battled a foe so powerful…[choke!]…I may never see Lois and Jimmy again!” found Thor wading in with near-giddy enthusiasm: “At last a worthy opponent!”)  And since they were all different, things got interesting when these heroes crossed each other’s paths.

As noted elsewhere, this is probably Stan’s most enduring contribution: the concept of a cohesive, interconnected universe that lends itself both to stories of individual heroism and sweeping sagas on a cosmic scale.  If (for me anyway) a lot of the old fun is gone from the comics, it’s found a second life on the big screen, where Stan’s storytelling approach is playing out in blockbuster movies unfolding the saga of an interconnected universe that blends spectacle and emotional stakes with a pervasive sense of humor and fun.

Anyway, every story has to end at some point, and Stan’s ran on longer than most. He had a good run of 95 years and left behind a huge legacy that involves making people happy.  A fella can’t ask for much more than that.  And if I missed out on being a Marvel kid the first time around, at least now I can feel like a kid every time I read those old tales from Stan and Jack and Steve (and John, and George, and Marie and Bill and Joe and the rest of the Bullpen).  Thanks for that, Stan, and godspeed. 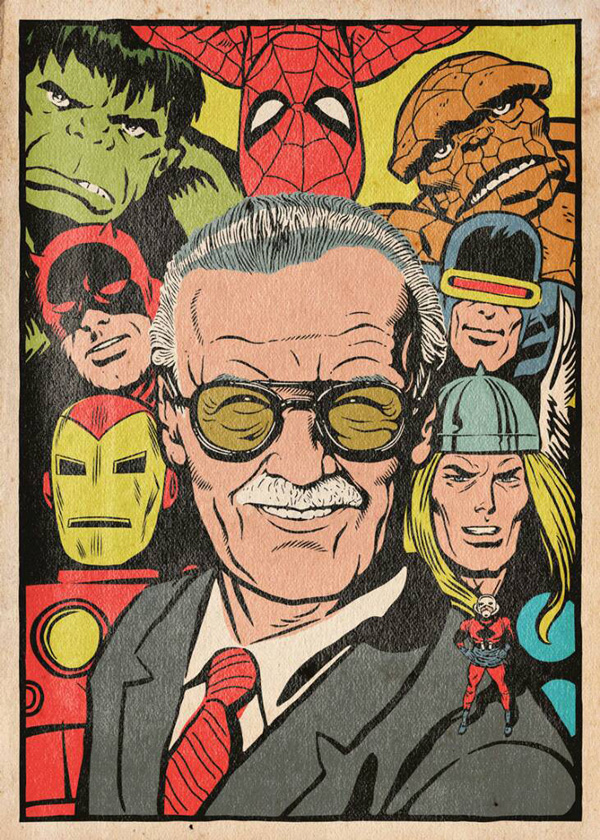