Well, this blog is long overdue for an update again, so I’ll try to recap some recent adventures in digest form.

First up, Laura and I celebrated our 25th (!) wedding anniversary at the end of August with a trip to Boston, marking our first trip together away from the kids in 15 years.  (Thanks to Laura’s mom for minding the home front!).  We’d had vague plans to return to Nova Scotia, where we honeymooned way back in nineteenmumblemumble, but with all we’ve had going on this year, plans just never came together.   It’ll happen one day, though.

Anyway, Boston’s always been on our “someday” list, and it turned out to be a very enjoyable visit.  Of course, we took the Virginia heat with us: highs were in the 70s before we arrived and after we left, but the entire time we were there, the city suffered record heat (upper 90s). That seemed fitting, given that our wedding day was also a sweltering record-setter, but such was probably small consolation to the people of Boston.  (Sorry, folks).  The heat wave meant the Bunker Hill monument was closed to visitors out of safety concerns (it’s basically a giant chimney) but it was still an interesting place to see, especially since I’d just read James Nelson’s account of the battle, With Fire And Sword, earlier this year.  Other than that, we got to see all the historic sites on our list, including a walking tour of the Freedom Trail with a costumed guide and a visit to “Old Ironsides” herself, the USS Contitution.   Then we just concentrated on attractions that would keep us  indoors, like the truly remarkable Museum of Fine Arts (where I fell in love with Van Gogh’s Houses At Auvers) and the very impressive Public Library, where a free tour highlighted the architectural genius of Charles Follen McKim (who I was interested in from his designs of NY’s old Pennsylvania Station and the Agricultural Building at the 1890 Chicago World’s Fair, as featured in Erik Larson’s Devil in the White City) and murals by John Singer Sargent.   And of course we fit in a lot of great seafood, though we broke the rules a bit and skipped the Italian restaurants;  all that heavy fare just didn’t appeal in the heat.

We skipped the rental car and used Lyft, which quickly started adding up, but once we got a gander at what passes for urban planning in Boston, we were happy not to have to navigate those byzantine streets, deal with the crazy drivers or try to find a place to park.  Between that and staying at an AirBnB, this was our “Internet Age” vacation.

On our return, we celebrated Grace’s 10th (!) birthday, another reminder of how fast life’s speeding by.  Grace continues to be a source of great joy in our lives, of course, and I think she had a good time on her big day, which she shares with her fish, Ballou (who’s only 1).

Then it was time to start fretting about Hurricane Florence, advertised as the worst weather event since Noah gathered the animals.  In the end, it bypassed us completely in favor of hammering the crap out of the Carolinas.  We spent one night camped out downstairs in the room furthest from any trees, but about 2AM I woke up to dead silence and a general feeling of foolishness.  VCU closed for two days out of an abundance of caution so I got a four-day weekend, but all we ended up with were intermittent showers. 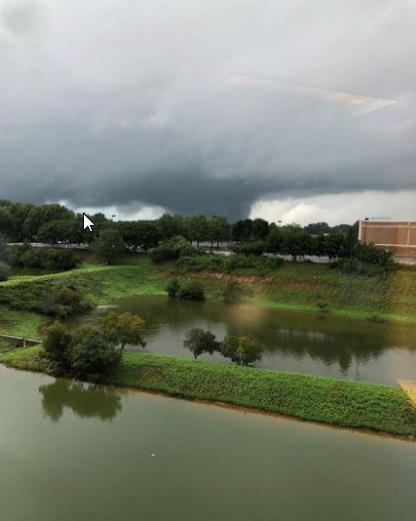 Just when we thought we were in the clear, though, what was left of the storm swung North and sparked seven tornadoes in the Richmond metro area, an unprecedented occurrence here. The most powerful of them touched down about two miles from our house in the parking lot in front of our favorite pizza shop, damaging a gym and flipping over a car before crossing all six lanes of Hull Street and demolishing a furniture store and a flooring warehouse, the latter sadly resulting in a fatality.  Good Minnesotan that she is, Laura’s twister radar was up and she crammed herself, the kids and several visitors into the laundry room until things died down, while I obeyed VCU’s (seemingly endless) alerts and stayed put in my office.  For once I was glad it’s in a basement.

Anyway, that should bring us more or less up to date.