Help!, the Beatles’ second motion picture, arrived in American theaters fifty years ago this month.  Like its predecessor A Hard Day’s Night, it was directed by Richard Lester and featured a number of new songs, a frantic pace and screwball humor, with the Fab Four playing a fictionalized version of themselves.  But where the first film was filmed in black and white, lending an almost documentary feel to the proceedings, Help! made the transition to living color and full-blown fantasy.

In fact color very much defines the look of the film, as the previous film’s city-bound and overcast “all England” locations give way to the blue skies and wide open locations in the Austrian Alps and the sunny Bahamas, and interior shots feature sets with brightly painted walls and lit with color gels.   Under cinematographer David Watkins, color practically becomes another character in the film. 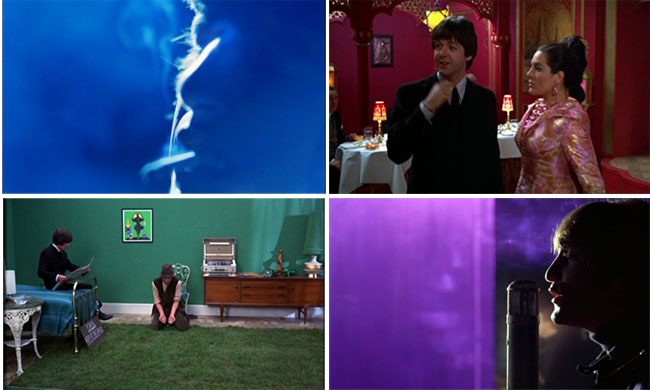 The plot, such as it is, centers on a ring that’s being sought both by members of an Indian cult and a pair of British mad scientists, but which is currently stuck on the finger of our favorite drummer, Ringo.  Beyond that basic notion, it’s mostly just an hour and a half of musical performances, slapstick comedy and pretty locations, strung together in just-short-of-random fashion.

The lads continue to demonstrate a flair for comedy, even if their accents and rapid-fire delivery can sometimes make the dialog a challenge for these American ears to follow.  Ringo probably fares best, especially in a scene where he explains to an incredulous police inspector that the cultists want to paint him red so he be sacrificed to their god.  “It’s a different religion from ours,” he says.  “I think.”

Just in case anyone’s still taking things seriously, at one point Paul is accidentally shrunk down to do doll size and has an “adventure on the floor.”  And hang on, girls: when he shrinks, his clothes are left behind! 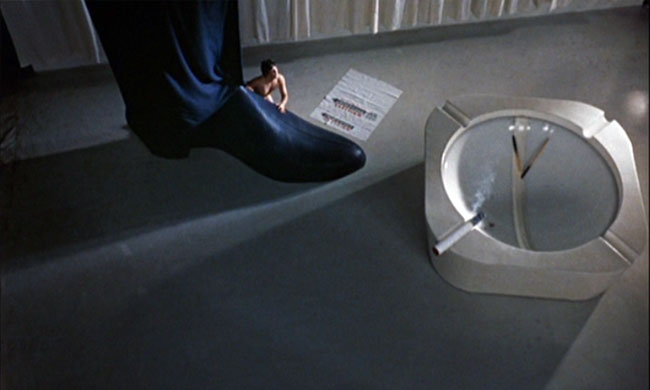 Cannily, the gag-a-minute approach only requires the stars to remember a few lines at a time, with the lion’s share of the work falling to the editors and post-production wizards to make it all somehow gel as a film.  And that’s a good thing, as all four of the Beatles later admitted they were usually too stoned to focus on much of anything during production, and even the shortest scene could take all day to capture between giggle fits.  Anyway, the genius of making the whole thing a madcap lark is that it almost renders criticism impossible.  “But it’s all so illogical!”  Yes, that’s what we were going for.  “Nothing makes any sense!”  Yep, that’s the idea.  And admittedly, it does kind of work. Films built around pop stars always involve ridiculous detours into the fantastic as characters suddenly break into song with mysterious instrumental accompaniment wafting in magically from somewhere off-camera (Heaven?) .  But whereas in the Elvis movies that just felt like a bizarre, almost supernatural interlude in an otherwise conventional romance or adventure, here launching into a spontaneous performance on electric instruments in the middle of a pasture, on a ski slope or on a beach is no more or less insane than anything else that happens. 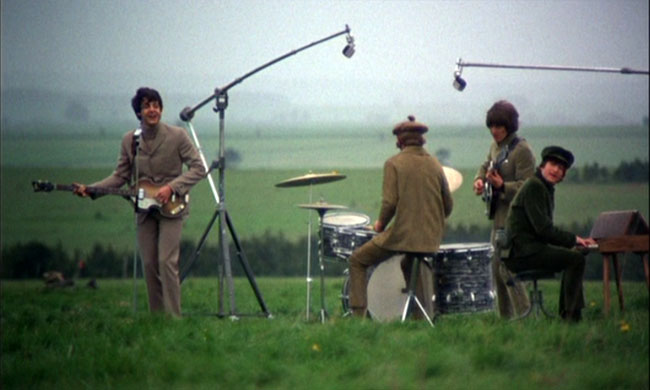 In about a year’s time, the Monkees would borrow this approach of stitching together short, comedic scenes shot in multiple locations with “concept” musical performances and build a TV show around it, becoming something of a popular sensation and earning more fan mail than any performers on the tube (though Mr Spock and Ilya Kuryakin gave them a run for their money).  Also in its no-holds barred use of garish color, Help!‘s inspiration is seen in shows like Batman, also a year away at this point.

There are three sequences that always stick out for me. One is our first look at the Beatles’ London flat(s).  In this fictionalized version of their lives, they all live happily together in a giant space that’s part swingin’ bachelor pad and part carnival funhouse (and which they’re able to casually enter and exit without being mobbed by throngs of screaming girls).

In a neat touch, the music stand on the electric organ is filled not with sheet music but with vintage issues of Action, Jimmy Olsen and Superman comics (I look at exactly which ones here).

The next wild scene comes when the lads try to travel incognito to the Bahamas, arriving at the airport in disguises designed to look ridiculously over-the-top but which, amazingly, end up closely mirroring the looks the Beatles will grow into in just a few years time.  Well, at least in the case of John, George and Ringo, anyway.    Paul just looks like he’s impersonating Eric Idle. 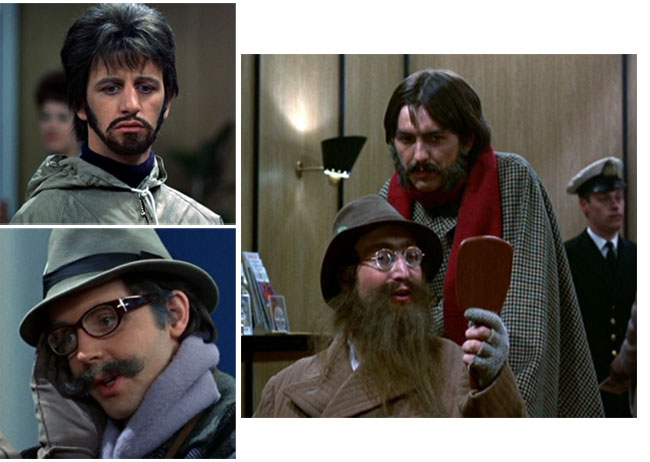 The other amazing scene comes in the Bahamas, when George rides on the back of the villains’ car in what strikes me as a fairly dangerous stunt.  In the Beatles Anthology book, George notes in surprised hindsight that the Fab Four were plopped onto skiis for the Austrian scenes and simply told to perform, despite having no experience whatever on skiis.  His point was that no one seemed overly concerned at the prospect of one or more of the films’ stars ending up seriously injured.  If anything, the car stunt is even more outrageous; from what I can tell that’s really George on the trunk as the car careens down a mountain road at a not inconsiderable rate of speed. 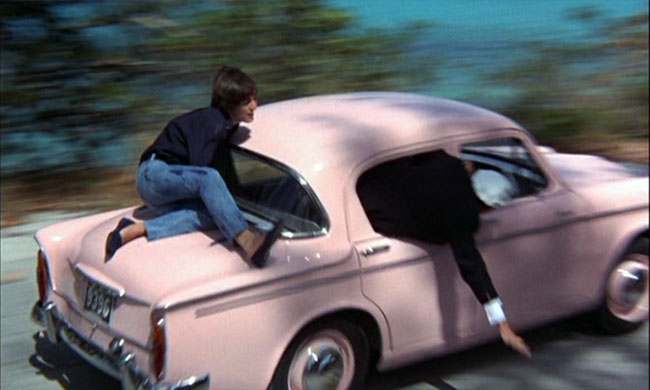 George doesn’t mention this stunt in Anthology, but he does note that the film provided his first introduction to Indian culture, a development that would have a huge influence in his life and music, and eventually, if briefly, lead all four Beatles to explore transcendental meditation under the Maharishi Mahesh Yogi.

Also interesting for me as a 007 fan is the influence of the Bond films, starting with composer Ken Thorne’s homage to the famous Bond theme (tacked on to the start of the title song, at least on the “Red Album”).  Goldfinger had exploded onto pop culture just a year earlier and was likely still in release as Help! was being filmed.  In one scene where the femme fatale tries to remove the ring from the finger of a slumbering Ringo, the accompanying music is clearly inspired by John Barry’s Goldfinger score, specifically the scene where Bond finds the late Jill Masterson covered in gold paint.   And in a “blink and you’ll miss it” gag, one of the villains doffs his headgear and throws it at someone, adding his own “swisshhh!” sound effect to mimic Oddjob’s deadly bowler.  However, as the “headgear” in this case is a turban, it merely unravels en route and falls to the floor.

As a film, I have to agree with the consensus that Help! is inferior to A Hard Day’s Night, and the first time I saw it, it didn’t really hold my attention to the end.  But as time goes on and 1965 slips further into antiquity, I think it takes on a greater value as a sort of filmic time capsule.  It’s got a lot of great footage of the young Beatles near the end of their “moptop” phase, the groovy fashions, interior designs and vehicles of the mid-60s, a few really clever gags and, of course, plenty of awesome music.  Also, taken in the context of the times, it takes a fairly ingenious approach to the old problem of how to make a movie starring non-actors.  Probably its greatest charm is that it presents the Beatles not quite as they were, but as we liked to imagine them; witty and carefree, shuttling around the world from one romp to the next, all living happily together in one groovy flat and prone to breaking spontaneously into song.