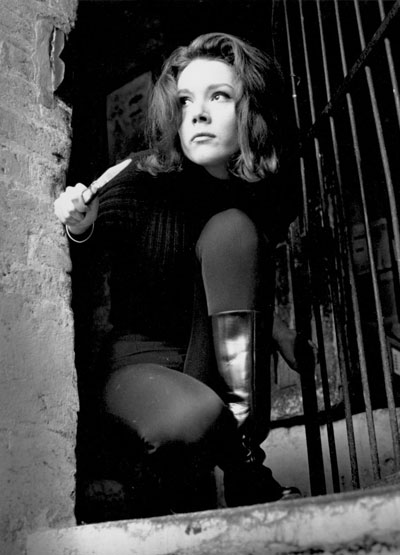 It’s hard to believe I share a birth year with Emma Peel, but that’s probably because I made my 1965 debut as an infant, while Emma showed up fully grown.  And rather nicely so, at that.

For the uninitiated, Mrs Emma Peel was the female half of The Avengers, the British dynamic duo that debuted on American airwaves in 1965 (even though the show had been around, with a different female lead, for a couple seasons already in the U.K.). Legend has it Emma’s name derived from the writers’ shorthand description of what the still-in-development character was to bring to the show: “Man Appeal” or “M. Appeal.”  This she delivered in spades, as legions of male admirers could attest.

I was a late joiner to those legions, having had to wait until the early 90s before I could finally see the show on cable’s A&E Network.  Until then, my exposure to the The Avengers concept was limited to The New Avengers, a short-lived, Emma-less revival in the late 70s that aired on the CBS Late Movie on Friday nights.  Suffice to say it wasn’t the same.

If ever a show was tailored to my oddball sensibilities, The Avengers was it.  At its center was the cool and quirky superspy John Steed (Patrick Macnee), who worked for a mysterious arm of British intelligence and came equipped with a sword-umbrella and a bowler hat with a steel crown good for konking foes on the noggin.  Like James Bond and other 60’s favorites Jonny Quest and The Wild Wild West, this was “spy” fare only in the 60’s pop culture sense; not political intrigue or anything remotely close to real-life espionage, but fantastic and fanciful battles with diabolical masterminds and their nefarious (if preposterous) schemes against mother England and the world. Episodes from the 1965 season involved robotic assassins, telepaths, weather-controlling devices, enemy submarines parked in Scottish lochs and man-eating plants from outer space.  Things would get even crazier the next year, with the addition of color. 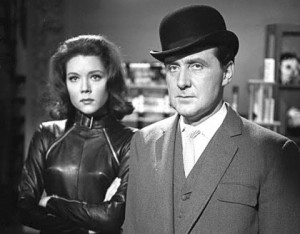 Also, for a confirmed Anglophile like myself, the show offered an idealized, fairy tale version of England, from a travel brochure-worthy London to gorgeous country estates, and populated with all manner of delightful eccentrics daft enough to make Steed, with all his affectations, seem positively normal in comparison.

Well, perhaps not normal, as Steed is held up repeatedly within the context of the show as the very exemplar of all that is British, what with his impeccable manners, his mastery of all things sartorial and culinary and his ability to handle any danger with imperturbable calm and wit.

And then there was Mrs Peel, in the (pleasing) form of Diana Rigg. Smart and capable, fearless and intrepid…and far from incidentally, quite lovely.  Where Steed represented the best of English tradition, Emma represented the future, with her trendy outfits and progressive attitudes.  And of course the “Mrs” signaled she was a widow, with all the “wink, wink, nudge, nudge” connotations that would have carried back in the day.   No mere “damsel in distress,” she was Steed’s equal in most respects, and his superior in others: accomplished artist, karate expert, crack shot, CEO of a major corporation; there was nothing she couldn’t do.  For every baddie Steed clobbered, Emma probably took out three.  When, in “The Masterminds,” the pair needs to infiltrate an exclusive club of geniuses, Emma passes the entry test with ease, while Steed only squeaks by because he cheats, with her help.

But lest the show be interpreted as outright propaganda for the Women’s Lib movement, it should be noted that few opportunities were missed to exploit Emma’s sex appeal, as she ended up clad in the flimsiest of outfits on the flimsiest of excuses, from leather catsuits to mini-skirts to bikinis to harem girl costumes and the like.  In later episodes, she would favor tight-fitting body suits known as “Emmapeelers,” often with holes artfully cut out to display flesh.  In the infamous “Touch of Brimstone” episode, she’s put in a black teddy with high-heel boots and a spiked dog collar, and attacked by a whip-wielding villain.  Apoplectic American network executives pulled that one from broadcast (but, it was rumored, enjoyed it privately at their Christmas parties). 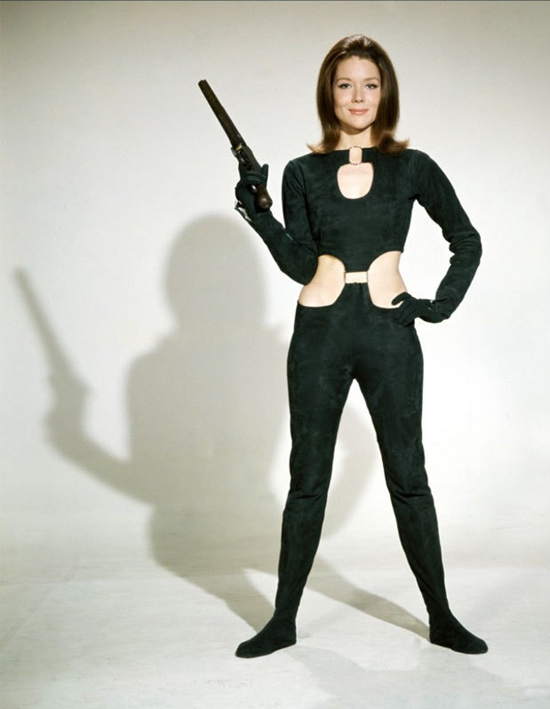 Steed’s previous partner had been Mrs. Cathy Gale, in the person of actress Honor Blackman.  Partial to leather outfits and adept at tossing bad guys across the room with her judo prowess, she made a huge impact on pop culture in the U.K. before leaving the show to take a step up (or down, depending on your point of view) to the role of “Pussy Galore” opposite Sean Connery’s James Bond in Goldfinger.  Unfortunately for her, this move came at the same time production of The Avengers transitioned from videotape to film, enabling its export to America, where a new, larger audience would assume Emma Peel was the first to knock down a lot of gender barriers that Cathy Gale had in fact already shattered. 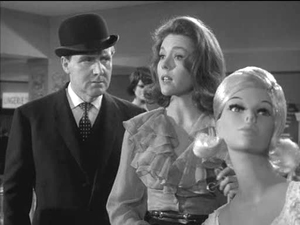 That said, Emma brought something new to the mix in the form of warmth and humor and a genuine affection for Steed.  Where Mrs Gale’s relationship to Steed was often adversarial and prickly, Mrs Peel’s was cozier and more openly flirty.  For instance, there was the scene in “Death At Bargain Prices” where Emma goes undercover as a department store salesperson and Steed shows up as a “customer:”

STEED: “I asked the chief predator where to find you.  He said, ‘our Mrs Peel is in Ladies’ Underwear.’ I rattled up the stairs three at a time!”

There’s certainly an attraction between these two, but they handle it the same way they handle all those insidious death traps, or the alarmingly frequent discovery of corpses in unexpected places: with breezy wit.  Fans watch closely for hints of what might have gone on between scenes (“Did they or didn’t they?”) and a certain current of romantic tension does add to the show’s charm (YouTube is rife with fan films accentuating their “special moments” to the accompaniment of various schmaltzy tunes).  But unlike, say, Moonlighting, Remington Steele or other shows that mix romance and crime-solving, with The Avengers it was never more than a subtext, very much secondary (at best) to whatever evil plot was unfolding, and never more than friendly flirting.  Thus, happily, we never reached the dead end we did with those other shows when the relationships eventually, inevitably passed the point of no return.  We never had to endure a scene where Mrs Peel said, “We need to talk about us…”

That said, it’s no less heartbreaking when, out of the blue, the presumed-dead Mr Peter Peel shows up very much alive and (understandably) wants his wife back.   Steed gets a last, chaste kiss (on the cheek!) and then Emma’s out of his flat, and his life, crossing paths on the stairway with the next girl in line, Tara King (Linda Thorson). 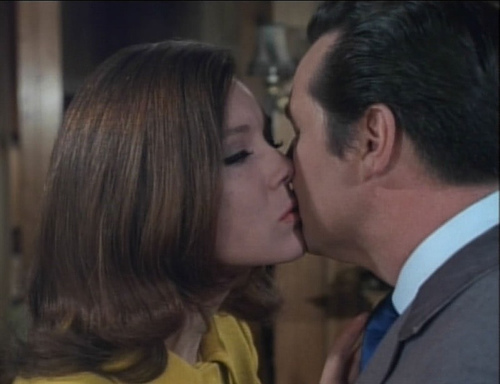 But while on screen Emma was rejoining her husband, in real life Diana Rigg, like Honor Blackman before her, was leaving Steed for James Bond (that bounder!).  As the Countess Teresa deVincenzo alias Tracy Bond in On Her Majesty’s Secret Service, she would present us with arguably the most important woman in 007’s life, and the only one who could get him to walk the aisle.  Alas, Bond isn’t the domestic type, so she also ends up dead in the end (Oops! Spoilers!).  Often, the “Bond girl” roles went to freshly discovered ingenues whose primary “qualifications” involved certain body measurements, but with a new and untried actor (George Lazenby) as Bond, and given the comparative gravitas inherent in the Tracy role, casting a known draw and proven talent like Ms Rigg made sense.

It might have worked too well. In his 1973 book, “James Bond Diary,” Roger Moore recalled attending a private screening of OHMSS hosted by Bond producer Harry Saltzman:  “When the lights came up, Harry said, ‘Well, what do you think of my new monster?’ Bob Goldstein, a Hollywood producer present, said ‘You made a mistake, Harry. You should have killed him and saved her.'”

Tracy would cast a long shadow, her marriage to Bond being one of the very few “canon” events in the series’ history, alluded to in the films of two (arguably 3) subsequent lead actors.  Meanwhile, Diana Rigg (now Dame Diana Rigg) would go on to more triumphs and remains in the spotlight at age 76 thanks to her award-winning performances on Game of Thrones.

Our Emma, though, would remain untouched by age or mortality.  She’s preserved forever as we last saw her, on the stairs of Steed’s flat, in her trendy outfit and with that ever-present air of casual confidence and good humor.  On her way out, she leaves Steed (and us) with the reminder to “Always keep your bowler on in times of stress, and watch out for diabolical masterminds.”

Words to live by.