Somehow we’ve turned into a chess household.  Jason, Scott and even Grace are playing chess, talking chess, planning chess, reading about chess pretty much all the time.

Actually, Jason goes way back with the game; somewhere I have a photo of him at about age 3, playing chess with his teddy bear.  We started him off with a game called “No Stress Chess” that teaches kids the way the pieces move and lets them draw cards to tell them which kind of piece to move next.  Which means the results are pretty random and unpredictable and strategy is nonexistent, but it’s a good entry point.  Then I think it got put away for a while until Scott was old enough, and interested enough to play.  Now the two of them play constantly.  Which is cool; when I was growing up my little brother liked the game but I never had the patience for it, or the brain to plan 10 or 20 moves in advance, so he didn’t get to play nearly as much as he liked.  It’s great that both my boys are equally into it, as they have a built-in partner to practice with. 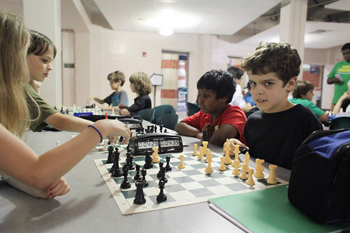 As I type this, I’m watching Jason play in his bi-weekly club, “Chess Knights,” held at the local library (Scott would be here, too, but he’s being punished.  Don’t get
me started).  A few weeks ago, they both participated in a week-long chess camp at Maggie Walker Governor’s School, and loved every minute of it.  They’ve been in three tournaments so far and in the last one, held at the Governor’s School, Jason finally realized his goal of taking home a first-place trophy. 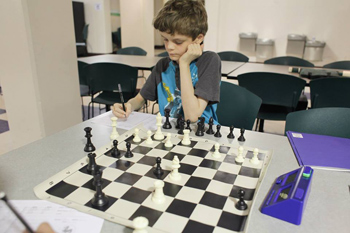 It’s great to see them enjoying it all so much, but I often find myself on the outside looking in.  Listening in on their conversations I quickly get lost as they throw around terms like “Queen’s Raid,” “Sicilian Defense,” “Back-rank Mate,” “Discovered Attack,” “Forced Mate” and so on.  Once they were in the back seat chatting away and Scotty made a reference to a move he’d made against an opponent in a recent game.  Jason asked him to clarify and Scotty, talking fast, recounted from memory about 12 moves (none of which I could’ve pictured without visual aids) and on about the 8th one, when he said a piece was moved to e5 Jason interjected “you mean e6,” since that was of course the more logical turn of events and sure enough Scott agreed to this correction.  At about that point I realized I’d never keep up with them, unspooling with words an entire game that both of them could see in their heads as clearly as if the board and pieces were sitting right there in front of them. 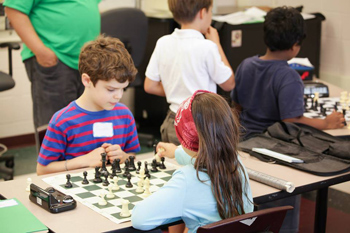 For Jason, it’s been great mental exercise for a brain that doesn’t always get all the input it craves.  For Scott, it’s been a great exercise in sitting still for long stretches and waiting patiently for the other guy to make his move.  And the best part is, they came to the game on their own, with no prodding from anyone.  As soon as we started taking them to tournaments, and they started winning games, the parents of some of the other kids starting seeking us out, asking, “So who taught them?  Who’s their coach?  What books have they read?” And that’s when I realized; even chess has “stage mothers.” In those households, it’s like the whole family is “on the team.” While the kids play, the parents are constantly on the lookout for the next threat, the “secret formula,” the trick that will take their kid to the top.  I haven’t really gotten the feeling those kids don’t actually like competing, but I’m still a little uncomfortable with the intensity of some of those parents.  Anyway, even when they ask what Jason’s secret is, I don’t have much to offer; his secret is he’s super-interested, and you can’t manufacture that.  When he gets money, he wants to spend it on chess books, when he’s allotted time for electronic entertainment, he goes straight to Chess.com, and when he’s not reading up on strategy, he’s researching the lives of Bobby Fischer and Garry Kasparov.  I thought I was doing him a favor recently bringing home a book from the library, but when he checked the contents page, he noted with disgust, “They spelled Spassky wrong!”

Anyway, it’s been educational, and it beats playing video games all day.  Supposedly some colleges even offer scholarships for highly rated players, so it may pay off down the road.  In the meantime, I just hope they keep having fun. 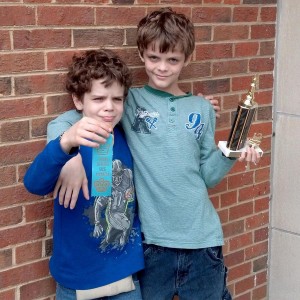