Like most folks, I’ve tried to find creative ways to stay busy during this whole pandemic thing.  Since I’ve had so much daylight and so many weekends without commitments, the house and yard are looking pretty good.  In fact, the neighborhood in general is looking a lot better since everyone else is in the same boat.

To keep life interesting I’ve also taken up new hobbies like learning the guitar (I’m making progress, slowly but surely) and growing a beard (the jury’s still out) and resuming old ones like reading vintage pulp novels and drawing.  On the latter front, I took another stab at caricature using a stylus on my 10-inch Kindle.  I go back and forth on whether I like it, but anyway here’s where I ended up. 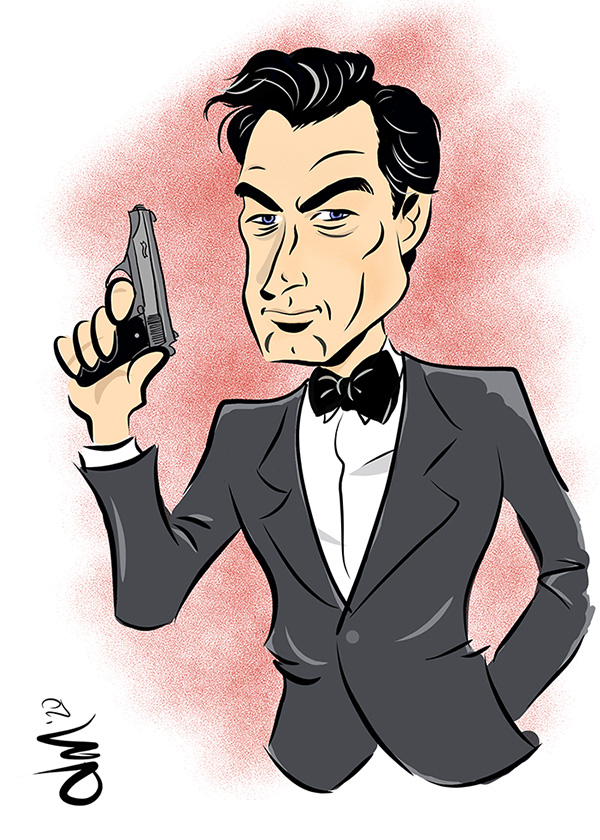 Hopefully you recognize that as two-time Bond actor Timothy Dalton, or maybe you just guessed it was “some take on James Bond” because of the tux and gun (hopefully I at least made THEM recognizable).

The task I’ve set for myself — besides drawing with a stylus, which can be challenge enough — is to capture a likeness with as few lines as I can, hopefully arriving at some kind of individual style as well as getting across who the person is.  Certainly I’ll never be in the league of the greats like Mort Drucker, Jack Davis or of Tom Richmond, who manage to walk a fine line between “real” and “cartoony,” but maybe with practice I can come up with a style that’s consistent and my own.

Anyway the cool part about digital drawing is the ability to “cheat.” I can create a “pencil” layer and “trace over” it with more controlled lines, then throw away the “pencils” like they were never there.  I can isolate eyes, or a nose or mouth, and drag them around if I got the relationships wrong.  I can even enlarge or reduce elements if I need to, or realign them if they’re off kilter.  Of course I could do all those things on a piece of paper with an eraser, too, but it’s so much cleaner and easier this way, and if I get several steps in and decide I don’t like the way it’s going, I can go back as many steps as I need.  Try erasing ink, or removing color from a drawing on paper.

If nothing else, I look at it as a learning experience; every mistake I make, every adjustment or do-over is a lesson learned for next time.  Hopefully it’ll rub off on my “real” drawings, too.  After all the only way to improve is to practice.  And right now, I’ve got plenty of time for that.

Figured maybe I should check in again as it’s been over a month. You’d think with all this “down time” I’d have more time to write blog posts, but if anything I’m as busy as ever, maybe more so. Working from home means not having clear boundaries of when you’re “on” and “off”, so I find myself doing job-related tasks at all hours, and answering e-mails well into the night, when before I’d have put them off until I got to the office.

The good news is that, so far, I still have a job. VCU is dancing around the idea of furloughs, but at this point nothing’s decided yet. This is good as a lot of other universities are having a much harder time of it. Still plenty of time for things to get worse, though, so I won’t jinx it, but as I told Grace the other day, we have it better than a lot of folks. We’re in a house, not an apartment, so we’re able to maintain a safe distance from other folks. We have the five of us, so no one’s miserably lonely. We all get along with each other, so there’s none of the violence or other ugliness we’re hearing about in some households. And for now at least we’re set on food. with plenty of experience at making our own meals, unlike a lot of friends who before this were eating out several times a week and “cooking” frozen dinners if anything.

I did get around to one half-forgotten “to-do” item, exhuming some of my old articles from the “Mr Kiss-Kiss Bang-Bang” James Bond fan site and giving them a new home here on the blog. Of course in the process I nearly broke the whole blog because I was so rusty at such things. Long story, but happy ending, so I’ll spare you.

I’m also coming along with the guitar, which is astonishing given how many failed attempts I’ve had at learning it in the last 25 years. Laura pointed me to a deal at Fender Play, where I got 3 months of free lessons, and it’s worked for me where several books and DVD courses couldn’t. I think what turned the tide was the freedom to pick up the instrument at all hours of the day, where before I was always either at work or committed to some weekend thing or other, and at night I didn’t want to make noise. Having time and access has been a big help. I’m still somewhere on the upper side of “absolute beginner” but at least I’ve learned some chords and the ability to change from one to the next (if awkwardly), plus a bit about musical notation and theory. So if nothing else I’ll come out of this isolation thing with a new skill. Yay.

The university’s hoping to start phasing the campus back into operation as we near August. It’s dependent on a lot of things, and not helped by Virginia’s dismal failure to get this situation under control. Less than 30% of Virginians stayed home as instructed, and most of them aren’t wearing masks when they do go out (and they tend to travel out of their home county, so it’s not like it’s a run to the grocery store). Not enough people are being tested, not even if they have symptoms and ask for it, so even though we know the infection rate’s going up, we really have no idea by how much. Now Virginia Beach has opened back up, so folks are flocking here from New York and other COVID hot spots. What could go wrong?

Anyway, we’re looking forward to a quiet Memorial Day weekend, with some yard projects on the schedule and whatever else appeals. And we’ll probably spend a few more hours at that great new American Pastime, making masks.