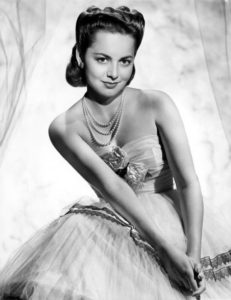 Olivia deHavilland passed away over the weekend.  At age 104, she was officially the eldest “celebrity crush” I’ve ever had.

Looking back, I probably first saw her in Airport ’77, a lame film even by the low standards of 70s disaster flicks.  As the middle-aged “Worried Passenger #28” or whatever, she made far less of an impression on 12-year-old me than a drowned Christopher Lee floating past the window of a sunken 747.  It wasn’t until the 90s that I “discovered” Olivia in all her youthful glory, opposite Errol Flynn in Captain Blood, and THAT made an impression.  It’s a cliche to say a performer “lights up the screen,” but in her case it fit, as there was a genuine luminance to her features and perfomance, all the more remarkable given she was only 19 years old at the time.

If Flynn was, on screen anyway, the perfect hero — dashing, honorable, courageous, a leader of men, then Olivia was his ideal match: beautiful, elegant, virtuous and in her own, less flashy way, heroic as well.  Their chemistry was undeniable; whether in medievel Sherwood, 1700s Jamaica or 1800s Dodge City, they were drawn together as if reincarnated through the ages to continue a love affair that stretched over multiple lives.  It was only in 20th Century real life they couldn’t make it work, although Flynn at least seemed to wish it.

Of course, Olivia would go onto much bigger and better things than playing “The Girlfriend,” winning two Academy Awards (for whatever that’s worth),  no thanks to studio boss Jack Warner, who would’ve been happy to keep her in period epics and romantic comedies as “the girl” forever, if he could.  Loaned out to MGM for Gone With The Wind, she finally had a chance to show greater range, and like everyone else associated with that film achieved a level of immortality.  Even now, she may be best remembered as “the last surviving star of Gone With The Wind,” which is ironic as I find her “Melanie” character as maddeningly “goody-goody” as Scarlett O’Hara was insufferably rotten.  Scarlett may have been conniving and selfish, but at least she was a survivor.  Melanie, in comparison, was too sweet and pure and angelic to survive the harsh realities of Earth.

The real Olivia was made of sterner stuff, outliving all her peers from the Golden Age of Hollywood (more than twice as long as Flynn!) and going toe-to-toe with Jack Warner — a guy who’d successfully shoved around the likes of Jimmy Cagney and Bette Davis — to win her freedom from an unreasonable contract, in the process driving a stake through the studio system and empowering generations of performers to act as free agents.  At 103, she was in the news again, suing a production company for defamation and striking a blow, in her way, for all her old comrades who are “fair game” for any scriptwriter to slander now that they’ve passed on.

So yeah, I know Olivia was formidable, and super-competent, and feisty to the end.  But I confess I’ll always love her best as “the girlfriend,” provided the “boyfriend” was Flynn.  Over his career, Errol was paired with fine leading ladies like Anne Sheridan, Rosalind Russell, Barbara Stanwyck, Bette Davis and Alexis Smith, but for most of us, there was Olivia and then there was everyone else.  When Errol and Olivia were on screen together, you believed they were meant for each other, and when Errol went into battle, you believed Olivia was the woman he’d risk everything for.

In fact, my favorite on-screen moment between the two comes in a pre-battle scene in They Died With Their Boots On.  Technically an “action picture” (which does have great action scenes) and a “bio-pic” (which isn’t even remotely close to historically accurate), in the end what holds the film together is the romance between George and Libby Custer, from their first meeting at West Point through a humorous courtship and a loving, sometimes difficult marriage to their final, heartbreaking separation on the eve of the Little Big Horn.  This was the last of Errol and Olivia’s eight films together, as Olivia was anxious to move on to other things.  In a weird nexus of fact and fiction, their characters’ goodbye scene was the last scene the stars ever filmed together, and it’s hard not to read extra layers into it: it was “meta” before “meta” was a thing.

Errol as Custer puts on a brave face as he heads out on a mission he knows he’ll never return from, while Olivia as Libby plays the role of dutiful wife to the end, equally certain of what’s ahead but knowing her husband needs her to be brave one last time.  It’s a masterful performance of a great script, where what’s not said is as important as what is.  Again, it has a “meta” feel to it, as the stars say goodbye to each other through scripted lines, speaking as other people.  Legend has it that even decades later, Olivia had to excuse herself from a screening of the film as this scene approached, unable to watch it without breaking down.  I can sympathize; I never get through it with a dry eye, either.

104 years is a great run, but there are certain folks you dread to read that last headline about, even though all logic tells you it’s coming.   There was a certain comfort knowing that somewhere out there (usually France) was a living link to the Golden Age of film, the girl who inspired heroes to great deeds and the woman who struck bold blows, herself.  Plus, it was an odd kind of fun, crushing on a centenarian.  Godspeed, Dame Olivia, and thanks.

During my recuperation, I’ve been enjoying my new box set of Errol Flynn westerns and getting back in touch with my inner Flynn fan.

Just for fun, here’s a clip from the star-studded “Thank Your Lucky Stars,” which gave Flynn a rare opportunity to show off his skills as a song-and-dance man. It also pokes good-natured fun at Flynn’s on-screen image as an action-hero and his off-screen reputation as a…well let’s say a champion fibber. To his credit, though, Flynn seems to be enjoying the spoof more than anyone. 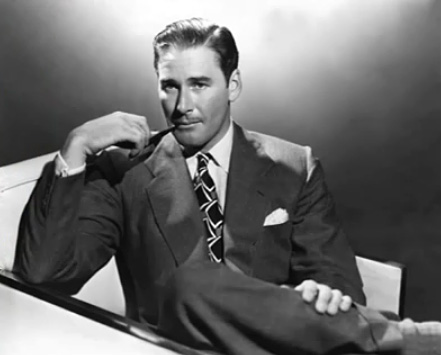 I first took notice of Flynn in 1991 with a late-night showing of Desperate Journey on TBS.  There I was channel surfing when who should appear but a young Ronald Reagan, climbing from the wreckage of a downed allied bomber deep in Nazi Germany.  With him was a dashing fellow with a pencil-thin mustache, and Chief Executive or no Chief Executive, it quickly became obvious who was the real star of the show.

I managed to stay up to the end of the film despite the constant commercial breaks, and was rewarded with a high-octane adventure in which Flynn, Reagan, Arthur Kennedy and Alan Hale repeatedly outsmarted Nazi general Raymond Massey, destroying roughly half of Germany on their way back to England.  (Not content with this contribution to the war effort, they fly off at the end of the film saying, “Now for Australia and a crack at those Japs!” ) As a war film, it was about as realistic as Indiana Jones, or maybe “Daffy The Commando“, but there was no denying the fun factor, and suddenly I had a new hero.

Thus began my own “desperate journey” to see Flynn in all his great roles; from noble outlaw Robin Hood to sea-going swashbucklers Peter Blood and Geoffrey Thorpe to Western heroes Wade Hatton and George Custer to the rakish, libidinous and suspiciously autobiographical Don Juan.  In each role, Flynn projected all those qualities we fans of heroic fiction so admire; courage, resourcefulness, wit, style, a graceful athleticism and that certain indefinable quality we call leadership. And of course it didn’t hurt that he was impossibly good-looking.

Off-screen, Flynn was a lot more complicated; a rogue, a womanizer and something of a con man, his real-life escapades became almost as legendary as his on-screen adventures, if not nearly so noble.  But if the real Flynn was decidedly less valorous than his on-screen alter egos, he was no less fascinating and larger-than-life.  He was an accomplished boxer who did his own fighting in Gentleman Jim and a real-life sailor who logged countless miles at sea.  Under the tutelage of master archer Howard Hill, he mastered the bow and arrow, and he handled a sword with such elan that most people never realized he wasn’t really a fencer (one nobable exception being Basil Rathbone, who grudingly had to “lose” to Flynn on screen despite his superior skill in real life).  Who can say how many generations of little boys were inspired to stage their own backyard swordfights after witnessing amazing fare such as this from 1948’s The Adventures of Don Juan:

Personally, I consider Don Juan the closest we ever came to seeing the real Flynn in a Hollywood production.   Like the title character, Flynn at this point in his life is still handsome, still charming, still up to the action,  but with a few more lines on the face, a few more pounds on the frame and a few seconds cut off the once lightning-like reflexes.  He is a Frankenstein monster of his own creation, enjoying fame and celebrity wherever he goes, but owing that fame (or infamy) to the scandalous reputation he earned as a young man and now finds impossible to move beyond.  Women expect romance from him, men a display of swordplay.  Weary of it all, but ever willing to please, he obliges gamely.  In quieter moments we see he’s realized the pointlessness of his lifestyle, but at the same time he’s having too much fun to ever really give it up.  At one point in the film, caught in the act of seducing a powerful man’s wife, Juan is tossed into a jail cell with his faithful companion Leporello (Alan Hale), who notes, “Surely there must be something more important in life than the pursuit of women?”  To which Juan replies thoughtfully, “Yes, there must be….But WHAT?”

The film ends with the hero a bit wiser but still unrepentant, still treating life as a party that need never end.  Flynn, however, was made of flesh and blood, not celluloid, and thus bound by physical laws; for him the party would only last another ten years.  He passed on in 1959, just 50 years old but looking much older thanks to years of booze and drugs and a list of physical ailments longer than his filmography.

Ultimately, though, Flynn lives on, and will as long as there are audiences who appreciate a rousing adventure, a daring hero, a thrilling swordfight and a storybook romance. Just pop in a DVD and he’s back among us as Robin Hood, openly defying Prince John in his own palace (“You speak treason!” “Fluently.”); as Wade Hatton, bringing law and order to Dodge City; as Peter Blood, leading his fellow slaves to freedom on the high seas, and in a half-dozen alternate lives in as many historical eras meeting and falling in love with the heart-breakingly sweet and beautiful Olivia DeHavilland (still around and gorgeous as ever, God bless her) in one of the greatest screen pairings of all time.

Flynn may not have had a lot of years on this world, but he lived every minute of what he had to the fullest, and as he saw fit.  And regardless of what condition he was in for his final bow, we fans will always remember him as The Perfect Specimen he was in his heyday.  As his old boss Jack Warner said, “To all the Walter Mittys of the world he was all the heroes in one magnificent, sexy, animal package.”

So in honor of Flynn’s centennial, go out and seize the day. Scare up an adventure.  Kiss your girl.  Share a laugh with your buddies.  And remember to laugh like a man: