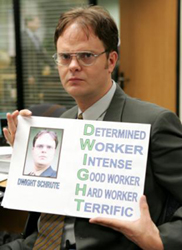 “People say, ‘Oh, it’s dangerous to keep weapons in the home or the workplace.’ Well, I say it’s better to be hurt by someone you know accidentally, than by a stranger on purpose.” 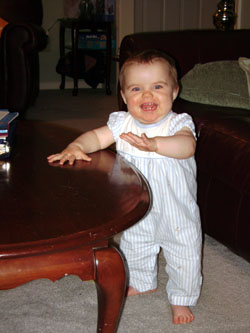 It’s hard to believe that a mere three weeks or so back, Grace could only rock back and forth on her hands and knees and hint at crawling. Today she’s speeding all over the place and inserting herself into any number of nooks and crannies…from which she’s then unable to extricate herself, naturally. She’s also able to stand straight up with one hand on a piece of furniture or other object to steady herself, and more than once, she’s let go with both hands to pick up an object, with predictable results. Over the weekend we visited Nana and Big Daddy in Chase City, and Grace added stair climbing to her repertoire, crawling up the same four carpeted steps Scott first learned to climb on.

Scott meanwhile is teaching himself to read and is currently figuring out vowels. It’s always hard to tell where we are with Scott because if you ask him a direct question he’ll plead ignorance:

Last night I took Jason to VCU for “Astronomy Night” and we learned some fun stuff about the planets, nebulae, pulsars, black holes and the lot. The auditorium was filled with homeschooled kids from Jason’s age on up into early teens, and whenever the presenter threw out questions about space and physics they piped up enthusiastically, usually with the right answers. Weird as it can be living with a kid with Jason’s brain, it was even more surreal being in a room full of them. Of course, much of the fun for Jason was just being out and about past his usual bedtime. Hopefully it made up for the night before, when he had a bad dream: Apparently there was an election (for what, I don’t know) and Jason received only 327 votes to Scott’s 916. Devastating.

Recently Jason was explaining to me how fast he could run around the yard and I told him maybe he could be in the Olympics when he grew up and he said, “Yes, and I’ll take my kid to see me in the Olympics. And I’ll buy him popcorn and drinks.” That would be very nice, I said. “Yes,” he answered solemnly, “I’m going to be nice when I grow up.”

In the proud tradition of Bill Clinton, who put a joint in his mouth to please half the room then refused to inhale so as to please the other half, the Obama administration is perfectly willing to continue Bush’s anti-terror policies, provided they’re stripped of all the confrontational language that puts the ACLU on high alert.

Thus the “war on terror” becomes an “overseas contingency operation” and terrorism itself is reclassified as a “man-caused disaster”.  Now satirist Joe Queenan has penned an article revealing what’s next for us in the kooky world of mealy-mouthed euphemisms.  The Taliban, he says, would like us to replace the term “beheading” with the more tactful “cephalic attrition,” while the government of Darfur would like to jettison “genocide” in favor of “maximum-intensity racial profiling.”

It would be even funnier if it weren’t true.

Okay, maybe I’m just sleep deprived waiting for baby to come, but somehow this YouTube clip struck me as hilarious. You kind of have to be a fan of Star Wars and Star Trek to get anything out of it, but what the heck.

Okay, as far as I’m concerned, stuff like this is the whole reason we even have an Internet. From deep within the “anything goes” vaults of YouTube, I give you a whacked-out harmonica band performing Raymond Scott’s “Powerhouse.” Kids, it’s cheaper than drugs and safer than sniffing glue.