Well, Pinewood Derby day has finally come and gone. Jason was hugely excited about the whole thing, having placed second in his den last year despite all his competitors being a year older (Jason was the only Tiger cub in a den of Wolves). This year he was aiming at first.

I made sure to point out that the fun is in the building and racing, not necessarily winning, that not everyone has such good luck first time at bat and it’s entirely possible this year wouldn’t go nearly so well. All of which he took in with due sobriety. Then on Monday night his car came in first in all six heats. Ah well. 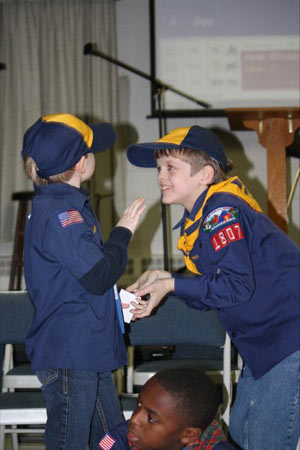 Jason’s pack uses a really nice track that has an electric eye at the finish line and connects to a laptop to report the times for up to six cars in each heat.  The cool part is it calculates the speed “to scale” so you can see how fast your car would have been going if it had been full sized.  Jason topped out around 194 mph, but some of the boys in the older dens were nearly at 200. 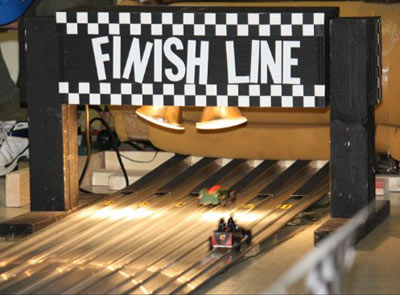 The downside to all that digital stuff is the lag time between races as information has to be typed in for each den.  One of the adult leaders helped fill those spaces by acting as master of ceremonies and keeping us entertained with jokes from the boys and interviews with parents and scouts.  After Jason won his races, he was asked (on microphone) how he felt about his car’s performance and answered, “Very great.”  Then he was asked how he came up with the design.  This is where you usually get a blank stare.  Jason shot back, “Well, I studied all the winners from last year, here and at District, then I took all the best elements from those cars and combined them to make mine.”

And that’s how I learned we even had a plan.  I did know he wanted flames from Day One, because the winner at District competition had flames.  So that must be the secret, right?  Well, he got his flames and now you’ll never convince him that wasn’t what did it for him.  Maybe it was. 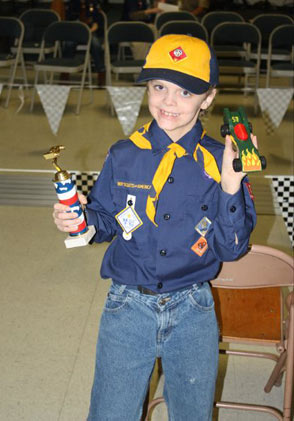 Incredibly, he also got the award for “most realistic” car, even though it doesn’t look like any I’ve ever seen, and the “decals” were laser-printed by me on ten-year-old label paper designed for VHS tapes, because I was too cheap to buy a 3×3 inch square of decals at the hobby shop for five bucks.

Scott went along and was a real trooper even though he didn’t have a lot to occupy him and the evening wore on until almost 10pm.  Of course just as we arrived, he piped up with “I’m kind of tired,” but he did great anyway.  He’s already planning his car for next year, when he finally gets to sign up as a Tiger.

So this weekend it’s on to District competition.  Then Pinewood Derby is done for another year.  Another year of talking about the next one.